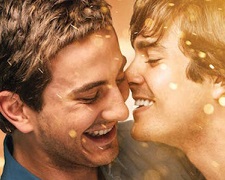 Timothy Conigrave and John Caleo were two high school students who fell in love during the mid-1970s.  Tim was a drama student.  John was captain of the AFL team.  It sounds like plot from a cheesy American teen movie but this is actually a true story.  Their relationship went through a number of ups and downs before both were diagnosed with HIV in 1985.

In the weeks prior to this death in October 1994, Conigrave put the finishing touches on his memoir, Holding The Man.  He died not knowing how big his story would become.  The book was first published in 1995 and won the UN Human Rights Award for Non-Fiction that same year.  It 2006, playwright Tommy Murphy adapted it for the stage and it has been performed across Australia as well as in London, Auckland, San Francisco and Los Angeles.

It’s a beautifully told story but a big reason behind the book’s success is that it chronicled a same-sex relationship and helped pull back the curtain on dealing with AIDS and HIV.  The homosexual community latched onto it immediately.  Someone finally had the courage to write about their world and their experiences.  It was different from many other novels sitting on library shelves.

We’re now at a point where the book that became a play has now become a movie.  Murphy took on the screenwriting duties with Neil Armfield, largely known for his theatrical work, sitting in the director’s chair.  After an extensive audition process they settled upon Ryan Corr (Not Suitable For Children) and Craig Stott (East of Everything) for the two leading roles.  They are supported by Australian acting royalty including Anthony LaPaglia, Guy Pearce and Geoffrey Rush.

The dialogue in the early, getting-to-know-each-other scenes is clunky.  It’s also hard to picture two actors in their mid-20s playing high school students (kind of reminds me of the Beverly Hills 90210 television series).  Thankfully, the film settles when we skip into the future and see them as full blown adults.  You can see what makes them different (Tim is more outgoing, John is more quiet) and also get a strong sense of their romantic connection.

It’s hard to summarise a life inside of two hours but Murphy has done a great job with the screenplay.  Tim and John’s story isn’t told chronologically.  We slip between years and observe them during different challenges in their lives.  It’s kind of like watching a Mike Leigh film – the focus is more on who these people are (aka a character study) as opposed to what they achieve.

Perhaps the film’s strongest attribute is the way it encapsulates the era.  We’re looking back 30-40 years (not all that long ago when you think about it) to a time when homosexuality wasn’t as accepted as it is today.  There are tough conversations shared between Tim, John and their parents that help provide perspective on the difficulties they faced in just being themselves.  The timing of the film’s release is ironic given the passionate debate currently being conducted in Australia on the subject of same-sex marriage.

Likely to be a strong contender at this year’s AACTA Awards (to be held in early December), Holding The Man is a moving drama that beautifully balances its broad timeframe.

You can read my chat with star Ryan Corr by clicking here.