Review: A Walk In The Woods 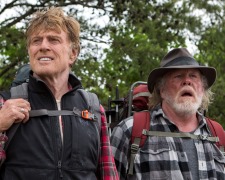 Acclaimed author Bill Bryson has received a lot of phone calls over the past 30 years.  One he never expected to receive was a film production company.  Bryson writes non-fiction books predominantly about science, history and travel.  They don’t feature wizards, vampires or hobbits.

Yet, it was Robert Redford’s own company that was looking to acquire the rights to Bryson’s A Walk in the Woods, first published in 1988.  The book chronicled his attempts to hike the Appalachian Trial – a 3,500km journey through the eastern United States that passes through 14 different states.  He was accompanied by a long-time friend who had been battling alcoholism and was looking to get his life back on track.  Bryson doesn’t reveal his real name in the book so he goes by the pseudonym of Stephen Katz.

Redford had hoped to bring A Walk in the Woods to the screen much earlier.  The rights were purchased in the early 2000s and he thought it would the perfect vehicle for he and Paul Newman to reunite on screen.  They had only collaborated twice previously – Butch Cassidy and the Sundance Kid in 1969 and The Sting in 1973 (which won the Academy Award for best picture).  Sadly, Redford’s dream never eventuated with Newman passing away in September 2008.

After sitting in limbo for a few years, the project was finally reinvigorated with Nick Nolte (Warrior, The Prince Of Tides) stepping into the shoes of Katz.  The film opens with Bryson expressing a desire to his wife (Thompson) that he wants to walk the lengthy Appalachian Trail and see one of America’s great natural treasurers.  She thinks he’s mad and suggests that he simply go on a road trip using the family Volvo.

Bryson is undeterred but doesn’t want to make the journey alone.  After calling several friends who brush him off with a litany of excuses, he is finally contacted by Katz who is keen.  It’s obvious from their opening hour on the trail that they’re ill-equipped for the trip ahead.  Not only do they lack the physical fitness, they are also struggling when it comes to general hiking knowhow.

The spirit of this film can be summed up by the famous saying – “the journey is the thing.”  It’s not like a sporting movie where you’re hoping the team wins the grand final or a gold medal.  It doesn’t make a difference if Bryson and Katz make it to the end of the trail.  The trip is about what they discover about each other and what they learn about this beautiful piece of the American landscape.

Parts of the film feel a little over-exaggerated.  They come across a fellow hiker named Mary Ellen who raises the bar when it comes to the use of the term “annoying”.  It’s also hard to fathom how Katz is able to survive more the day given his age (Nick Nolte was 73-years-old at the time of filming) and lack of preparation.  I put these questions to the real Bill Bryson during a recent Q&A session here in Brisbane who defended what is depicted on screen.  It turns out Mary Ellen really was that annoying!

Films like The Best Exotic Marigold Hotel have highlighted that there is still a healthy audience for movies about elderly folk trying to find love and friendship.  A Walk In The Woods is pitched at the same crowd.  It features two great leading performances from Redford and Nolte who find the right balance of comedy and sincerity.  It also offers a brief history lesson into the Appalachian Trail and will encourage many to go out and experience it for themselves.

You can read by chat with author Bill Bryson by clicking here.