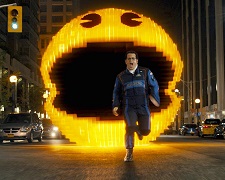 Walt Disney Animation Studios had been kicking around the idea of a video game movie for 20 years but they were struggling to craft a screenplay that best fit the material.  They eventually put their faith in writer-director Rich Moore (who started his career working on The Simpsons) and they came up with Wreck-It-Ralph in 2012.  Well received by both the public and critics, the film made $471m at the worldwide box-office and earned an Oscar nomination for best animated feature (losing to Brave).

Columbia Pictures have tried to create the live-action equivalent with Pixels.  It begins with a flashback to 1982 when a group of talented teenagers were competing in the world championship of arcade games.  The game list included Pac-Man, Galaga, Centipede, Space Invaders, Frogger and Donkey Kong.  NASA included video footage of the event in a time capsule that was sent into outer space in search of alien life.

Moving forward to the current day, we learn that the aliens found the capsule.  Unfortunately, they took the footage as a declaration of war.  They have recreated real-life versions of these famed video game characters and are using them to attack Earth as part of a series of contests.  If the human race does not emerge as the victors, the planet will be annihilated.

The incompetent U.S. military does not have the necessary expertise in this area and so it’s fallen upon those same arcade game gurus from thirty years ago to save the day.  They include Sam (Sandler) – a tech installer who recently went through a divorce, Ludlow (Gad) – a paranoid conspiracy-theorist who still lives at home with his mother, and Eddie (Dinklage) – an arrogant fraudster currently serving time in prison.  They’ve got the approval to help from old friend William Cooper (James) who, despite his unpopularity, has somehow risen to become the President of United States.

Wreck-It-Ralph was rich in detail and came with a big heart.  It had strong messages about standing up for one’s self and not always judging a book by its cover.  There were also plenty of laughs for both kids and adults.

Pixels doesn’t offer as much.  The emphasis is on explosions, spectacle and goofy characters which makes me think it’s aimed at a younger crowd.  Director Chris Columbus has a proven track record as a family filmmaker (Home Alone, Mrs Doubfire, the first two Harry Potter flicks) but this script lets him down.

Why is there only one young cast member (14-year-old Matt Lintz) and why is he shoved so deeply into the background?  Why not get him involved in the action and give kids someone to relate to?  The adult cast are carrying too much of the load here.  I grew tired of Kevin James as the bumbling President and Adam Sandler as the reluctant hero.  There’s a military leader played by Brian Cox who doesn’t seem to know what he wants.

Coming up short in terms of both humour and story, Pixels runs out of lives well before the closing credits.