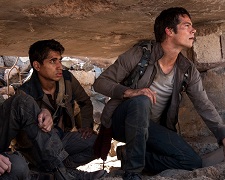 20th Century Fox were pretty quick to push the sequel button following the success of last year’s The Maze Runner.  After reeling in $345 million at the worldwide box-office (on a budget of just $34 million), this follow up was in production within weeks of the original’s release.  A third and final film (thankfully not split into two movies) will be in theatres in February 2017.

I was a huge fan of The Maze Runner and found a spot for it in my top 10 films list of 2014.  By way of recap, it centred on a teenager named Thomas (O’Brien) who woke up in the centre of a maze with no recollection of how he got there.  Director Wes Ball aptly described the film as “Lord of the Flies meets Lost.”  Thomas and his newfound friends managed to defeat the maze… but not before they almost defeated each other.  A bitter power struggle developed between two factions and several characters didn’t make it to the end.

It was a film that offered much intrigue.  Where did the kids come from?  Who built the maze?  Why couldn’t they remember their past?  Despite being entirely contained within one location, The Maze Runner held my attention all the way through.  By comparison, The Scorch Trials isn’t as exciting.  It’s a more generic action film that tries to add more characters and more locations… but feels a lot less suspenseful.

It opens with the rescued teenagers waking up in a well-fortified military facility.  They are told that they need to be kept there for their own protection because the “world is hanging on by a thread.”  A virus has turned millions of humans into zombie-like creatures and a group of scientists are working around the clock to find a cure.

His friends are relieved to find sanctuary but Thomas feels that something isn’t right.  Those suspicions are confirmed when he breaks into a locked laboratory and discovers medical experiments being performed on other kids.  It turns out they’re being “harvested” for a cure to the virus and it’s only a matter of time before he’ll meet a similar fate.  The group behind it all is known as WCKD which stands for World in Catastrophe: Killzone Experiment Department.

Thomas orchestrates an escape from the facility but the world outside isn’t much safer.  Not only are they being pursued by WCKD’s militia, they also have to outsmart zombies and other folk who can’t be trusted.  All of this takes place in deserts, mountains, tunnels, and dilapidated high rises.  There’s even a sudden lightning storm (which doesn’t make much sense).  In essence, this is a two-hour chase movie.  These teenagers are on the run with no substantive plan as to where they’re going and how they’re going to get there.

Adapted from the novel by James Dashner, The Scorch Trials is trying to pack a lot into its running time but it still feels like a bridge between two better movies.  It’s not until the final scenes where the momentum and excitement starts to build.  It’s set itself up for a juicy final instalment but much of the content in this film is forgettable.  The running scenes are repetitive and the story development is light.

Director Wes Ball does his best to give the film his own look.  A few of the action sequences are over-edited and it’s hard to keep up with what’s going on.  Still, I enjoyed the intricate locations (such as a deserted shopping mall) and Ball’s use of light.  The kids are often running in the dark and in some cases, it’s only their fast-moving torches that provide us with a glimpse of their surroundings.

We’ll do it all again in 18 months time.