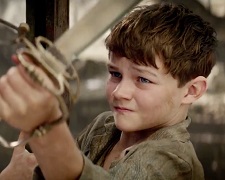 J.M. Barrie’s much loved work, Peter Pan, has been adapted in multiple forms on multiple occasions.  An animated feature was produced by Walt Disney in 1953.  A live-action sequel was directed by Steven Spielberg in 1991 (Hook).  A Tony Award winning musical was first performed on Broadway in 1954.  A 65 episode animated television series first aired in 1990 (Peter Pan and the Pirates).  Even video games have been released for Nintendo, Sega and PlayStation consoles.

The latest filmmakers to etch their names on the Peter Pan honour roll are English director Joe Wright (Pride & Prejudice, Atonement) and American screenwriter Jason Fuchs (Ice Age: Continental Drift).  They’ve tried to put a fresh spin on Barrie’s material by creating a prequel.  We’re told by the narrator during the opening scene that “this isn’t the story you’ve heard before.”

When we first meet Peter (Miller), he’s a mischievous 12-year-old living in a British orphanage.  It’s where he was left by his mother when just a baby.  His life is now controlled by a group of Catholic nuns who would be better suited as villains in a James Bond movie.  They’re rude, strict and horribly unpleasant.

Late one night, Peter and his fellow orphans are whisked away by a large flying pirate ship.  They are transported to Neverland and are introduced to Blackbeard (Jackman) – “the pirate that all pirates fear.”  Neverland isn’t the nicest of places.  As the ruling dictator, Blackbeard has effectively enslaved the children and put them to work in the pixie dust mines.  He offers “no mercy, no pity, and no second chances.”

Unfortunately for Blackbeard, his days are numbered.  A well-known prophecy tells of an uprising that will be spearheaded by “a boy who could fly”.  That’s where Peter comes into the frame.  He’s unsure about his newfound flying abilities and doesn’t really see himself as a hero… but Peter will be guided by an assortment of new friends including James Hook (Hedlund) and Tiger Lily (Mara).

There’s no question that Pan is trying to offer something a little bit different.  Joe Wright’s over-the-top use of colour in Neverland gives the film an impressive visual style that should charm adolescent audiences.  He’s taken it to a level where even the gunpowder looks like it’s been crafted from a rainbow.  It’s an appropriate contrast from the dark, grim orphanage back home.  Wright’s use of music will also surprise.  If you think that a Nirvana song has no place in a Peter Pan movie then think again.

Performance wise, the big winner of the film is 12-year-old Levi Miller who charms in the title role.  After scouring the globe for the actor with the ideal blend of talent and innocence, Wright found Miller right here in Brisbane, Australia.  We’ll be seeing a lot more of him on screen (including in the Red Dog sequel due for release next year).

Hugh Jackman, after years of playing heroes, has fun slipping into the shoes (and wig) of a bad guy.  He’s created an unsettling, contradictory character who is forever changing personalities.  This is best evidenced in a scene where he meets Peter for the first time.  Garrett Hedlund (Tron: Legacy) and Rooney Mara (The Girl With The Dragon Tattoo) add to the film’s star power but have drawn the short straw in terms of rousing dialogue.

Pan is clearly targeted at a younger crowd.  Kids can picture themselves as Peter Pan and lose themselves in this cool fantasy world.  They may find some of the action sequences too convoluted (such as the climax with the flying pirate ships) but the rest is relatively easy to follow.  As for full-price paying adults, well, they can please themselves.

You can read my chat with star Hugh Jackman by clicking here.