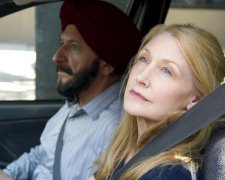 Darwan (Kingsley) is a quiet, unassuming guy who lives in New York City.  He was born and raised in India but is now an American citizen after seeking political asylum more than a decade ago.  Darwan is university educated but for a variety of reasons, he’s fallen back on two jobs that require a much lower skill set.  By day, he’s a driving instructor and by night, he’s a taxi driver.

His life outside of work is more complicated than he’d prefer.  Darwan is housing a group of illegal immigrants including his nephew, Preet (Nash).  They have to be very careful what they do and who they interact with.  Darwin is also facing pressure from his extended family to get married.  His sister believes she’s found the perfect woman, Jasleen (Choudhury), and plans for an arranged marriage have been put in motion.

Wendy (Clarkson) is a renowned book critic who has lived in New York her whole life.  Her own world is unravelling after learning that her husband (Weber) is having an affair with a younger woman and is seeking a divorce.  When she’s not crying, she’s venting.  Wendy has a lot that she’d like to get off her chest.  She’d also like to spend more time with her daughter (Gummer) who is now attending college in Vermont.

To come back to the film’s title… Wendy can’t drive up to Vermont because she doesn’t have a licence.  She’s always relied on New York City’s famous yellow taxis and intricate subway system.  It was her husband who did the driving if they ever need to travel long distances.  Having pushed back on the idea for decades, Wendy finally makes a rash, split-second decision to get some driving lessons.

By now, the path of this film should be quite clear.  After meeting by chance, Wendy enlists Darwan as her driving instructor.  The early lessons aren’t great.  The nervous Wendy is looking for any excuse to give up but Darwan is determined to get her to the finish line.  He uses his experience and calm, soothing voice to provide Wendy with the confidence she badly needs.  What develops between them is a little more than a friendship… but a little less than a relationship.

To use a simple metaphor, Learning To Drive is a film that contained all the right ingredients but something went wrong during the cooking process.  Isabel Coixet (Elegy, The Secret Life Of Words) is an acclaimed Spanish director who has picked up prizes at film festivals round the world.  Ben Kingsley (Sexy Beast) and Patricia Clarkson (Pieces Of April) are two terrific actors with extensive resumes.

As a whole, it’s a film that feels insignificant.  There are glimpses of intrigue but we never get to know the characters well enough to care for them.  Wendy opens up a box with old family photos.  Darwan talks fleetingly about his life in India.  Unfortunately, these subplots are overshadowed by lengthier, less interesting scenes.  The driving lessons are repetitive and the fantasy sequences involving Wendy are a confusing distraction.  Further, not enough attention is given to Jasleen given her importance to the story.

Learning To Drive contains several well-intentioned messages but it lacks the detail and character interaction required to sell them.