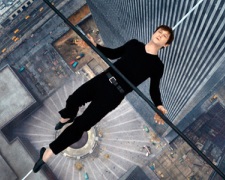 This is the greatest story I’ve ever heard in my life.  No, I am not exaggerating.  This isn’t one of those moments where I’m over-hyping something for dramatic effect.  I first learned about French hire-wire artist Philippe Petit through the 2008 Oscar-winning documentary, Man On Wire.  It reduced me to tears and if you haven’t seen it, I’d strongly suggest you do so.

In August 1974, Petit completed what many believed would be impossible.  After 6 years of planning, he and his friends broke into the World Trade Centre towers in New York City.  They rigged a metal wire between the rooves of the two buildings and Petit used it as a tight-rope.

Just thinking about it makes me nauseous.  A guy is walking 60 metres along a thin wire that is located 110 stories above the ground.  He had no harness.  He had no safety net.  Oh, and he didn’t walk across the wire just once.  He did it 8 times over a 45 minute period.  He even kneeled on the wire and saluted the crowds below who were watching this “once in a lifetime” act.

How was this possible?  How could Petit balance his entire weight on the wire for so long?  How could he allow for the wind at such a height?  How could he push the fear of falling so deeply into the back of his mind?  How could be break into these iconic New York buildings with all the necessary equipment to rig the wires in the first place?  How could he convince his friends to be involved in these illegal activities for no financial gain?

I had doubts when I first heard about this movie.  Having already seen the brilliant documentary, could a Hollywood-ised dramatization really add much more?  It turns out the answer is yes.  Director Robert Zemeckis is a filmmaker who breaks boundaries when it comes to visual effects.  Three of his films won the Oscar for in that category – Who Framed Roger Rabbit, Death Becomes Her and Forrest Gump.  The Polar Express also has a place in the Guinness World Book of Records as the first all-digital capture film.

Perhaps my fear of heights was a contributing factor but The Walk provides a film-going experience unlike anything I’ve seen this year.  There’s an early scene where Petit (played by Joseph Gordon-Levitt) pictures himself standing on the small beam that protrudes from the top of the north tower.  I could feel myself tensing up.  Of course, that was nothing compared to the film’s lengthy climax.  Shot using astonishing 3D imagery, it left me with sweaty palms and a light head.  It looks all too real.

The screenplay comes together nicely.  A few facts have been changed but they’re understandable given it all must fit into a two hour running time.  Gordon-Levitt trained with the real Philippe Petit to gain an appreciation of his persona and the art of wire walking.  That comes through his terrific performance where he portrays Petit as a man who is brash, cocky and inspiring.  The use of narration also helps us get inside his head.

It’s a shame that the early box-office numbers from the United States for The Walk have been poor.  Audiences are more interested in The Martian and Hotel Transylvania 2.  All I can say is that if you give this the flick, you’re missing out on a wild ride and an incredible true story.