Review: In The Heart Of The Sea 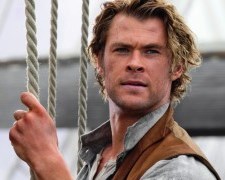 Most would be familiar with the novel Moby Dick, written by American author Herman Melville in 1851.  It’s the tale of a man who seeks revenge against a giant white whale that destroyed his ship.  The book was not a commercial success during his lifetime.  It wasn’t until the early 20th Century that literary critics started appreciating its style and themes.

In the Heart of the Sea is not a cinematic adaptation of Moby Dick.  That’s been done numerous times before.  Instead, director Ron Howard has taken a different angle and is showing us how the book came to be written.  Melville’s work wasn’t a complete work of fiction.  It was inspired by a true story that took place several decades earlier.

The film begins in the year 1850 with Melville (Whishaw) travelling to a small island off the coast of Massachusetts.  He has arranged a meeting with Thomas Nickerson (Gleeson), the only living survivor from a large ship that had sank 30 years earlier.  Many believed the ship had simply run aground but Melville had heard rumours that the subsequent inquiry was “less than truthful.”  He was hoping that Nickerson would reveal what actually took place.

It’s at this point where the narrative slips back to the year 1820 and introduces us to the crew of the Essex, a whaling ship about to embark on a lengthy voyage.  Its two leaders are from different backgrounds and they don’t see eye-to-eye.  Captain George Pollard (Walker) is relatively inexperienced and only appears to have landed the job because of his father’s wealth and connections.  First Mate Owen Chase (Hemsworth) comes from a poor upbringing but has worked hard for many years and is now highly regarded by his fellow crew.

If you’ve seen the film’s trailers and advertisements, you may think this is an action film about a ship that gets attacked by a giant whale.  That does occur but it only makes up a small part of the movie.  It’s ultimately a story about survival.  After the main ship sinks, the seamen find themselves stuck in tiny whale boats in a part of the ocean “as far from men as we could possibly go.”  With little food and water, their only hope is to rely on the winds to guide them towards land.

Ron Howard is a director who likes to work out of his comfort zone.  His expansive resume includes films from almost every genre – Splash, Cocoon, Parenthood, Far & Away, Apollo 13, How the Grinch Stole Christmas, A Beautiful Mind, The Da Vinci Code and Rush.  In the Heart of the Sea presented its own challenges given it was shot mostly on water.  Some scenes were shot in a studio tank whilst more expansive ocean scenes were shot off the Canary Islands.

There’s an odd pacing to the film that’s difficult to shrug off.  For example, there’s a moment where the boats are attacked for a second time by the giant white whale but it’s all over in a flash with minimal tension.  At first, I thought it was a dream sequence given the quick cut away to the next segment.

The action sequences on the ship also feel like they’ve been overthought.  Cinematographer Anthony Dod Mantle (Slumdog Millionaire) has attached cameras to objects such as the mast and whale to create a bunch of GoPro style shots.  They look out of place though when you mix them together with the hand held stuff.  The fast-paced editing adds to the confusing nature of some scenes.  It’s tough to work out what the actors are doing and why they’re doing it.

Based on the nonfiction book from author Nathaniel Philbrick which won a National Book Award in 2000, In the Heart of the Sea wants to be a gripping adventure but it just couldn’t pull me in.