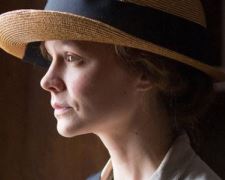 Time has a way of making past generations look very foolish.  Women were once burned at the stake in Europe after being found guilty of “witchcraft”.  Africans were once shipped to the United States and made to work as slaves on plantations.  Jews were once persecuted and sent to gas chambers by the German Government.  I often wonder how our current generation will be viewed with the benefit of hindsight.

Set in London 1912, Suffragette is centred on a group of British women pushing for the right to vote in national elections.  They had been denied the opportunity to elect their country’s leaders since the passing of key legislation in the 1830s.

The film’s early sequences highlight the “culture” that was engrained at the time.  A woman’s role was to find a husband, have children, and maintain a home.  Those that worked found themselves in factory or domestic service jobs that offered long hours and low pay.  There’s a scene where a Member of Parliament laments that “if we allow women to vote, it will be the loss of social structure.”  It sounds like an outlandish statement but it was a view shared by many.

The drive for women’s voting rights encompassed several decades but screenwriter Abi Morgan (The Iron Lady, Shame) has focused her attention on a specific point along the timeline – the period just prior to World War I where the protests were becoming more violent and the issue was reaching a tipping point.  Director Sarah Gavron believes it to be an important piece of history that isn’t taught it schools and is quickly being forgotten.

Morgan and Gavron have created a number of fictional characters that offer differing perspectives on the protests.  The central figure is Maud Watts (Mulligan), a married woman with a young child.  She’s reluctant to get involved but her passion and confidence grows after being introduced to other protestors including Edith (Carter), Violet (Duff), Alice (Garai), and union leader Emmeline Pankhurst (Streep).

It’s a little hard to buy into Maud’s transformation from unwilling nobody to a highly-regarded heavyweight but the film does a great job illustrating her emotional pain throughout the process.  She spends time in prison, is ostracised by her husband, and loses custody of her child.  It’s a big price to pay and there are several moments where she questions her own judgement.

The film’s other thought-provoking theme is the way it explores the methods adopted by the protestors.  Realising that peaceful marches were not making an impact, several of the women took more radical action by cutting telephone wires and bombing letter boxes.  Some saw it as a chance to increase media attention about their plight.  Others were worried that these destructive actions might push supporters away.  As one of the film’s best characters, Brendan Gleeson (The Guard) plays a police officer torn between upholding the law while also being sympathetic to the views of the protestors.

Suffragette highlights how much the world has changed for the better over the past century.  However, it also highlights there is still much room for improvement.