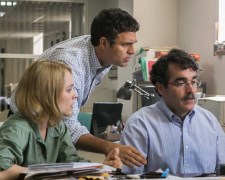 In January 2002, the Boston Globe published a series of articles exposing a major cover up within the Catholic archdiocese of Boston.  Priests had been abusing children for decades.  Instead of confessing their sins, the Catholic Church had used their wealth and power to keep it hidden from the public.  The newspaper won the Pulitzer Prize for Public Service in recognition of their efforts in bringing the issue to the world’s attention.

Writer-director Tom McCarthy (The Station Agent, The Visitor) has brought this engrossing tale to the screen in Spotlight.  As we see during the opening scenes, the spark that lit the fire was Marty Baron (Schreiber), a shrewd journalist who took on the chief editor role at the Boston Globe in July 2001.  Intrigued by a small story about a convicted priest, he asked his newspaper’s four-person investigative unit, Spotlight, to dig deeper.  Was this an isolated incident or something much bigger?

The Catholic Church has a lot to answer for.  There’s no doubt about that.  Spotlight goes a step further though and also points the finger at the “enablers” who allowed child abuse to occur for so long.  Lawyers for the Church asked victims to sign confidentiality agreements to keep things quiet.  Journalists failed to grasp the magnitude of the problem when reporting on isolated cases.  Parishioners were unwilling to question the religious institution that was so critical to their lives.  It’s as if everyone knew but no one wanted to say anything.

McCarthy spent months researching the subject to ensure the film was as factually accurate as possible.  He enlisted co-writer Josh Singer (The West Wing, The Fifth Estate) to help out given the breadth of material.  They have included a daringly large number of subplots but each has been given sufficient attention.  McCarthy and Singer used creative licence and have met the challenge of condensing such a wide story into a mere two hours.

Their script highlights the tough challenges that all investigative journalists face.  For example, there’s a moment where a Spotlight journalist (Ruffalo) tries to coax valuable information from a frazzled lawyer representing abuse victims (Tucci).  It’s clear the lawyer has something he wants to get off his chest but his obligations to his clients and his profession put him in a tough moral space.  You can sense the trust that is slowly growing between these two characters as the narrative progresses.

This is clearly one of the year's best films and the performances of the cast cannot be faulted.  Rachel McAdams is superb as a journalist who delicately speaks with several victims of child abuse and encourages them to go public with their stories.  Mark Ruffalo is equally impressive as a reporter struggling to keep his emotions in check while going after key legal documents.  Liev Schreiber is terrific as the boss who, despite his emotionless disposition, says the right things to keep his staff on track.  Michael Keaton is picking up early awards season buzz with his portrayal as a journalist putting pressure on old friends to confirm critical sources.

During the filmmaking process, someone mentioned to McCarthy that “it’s a great time to be part of local corruption.”  He was referring to staff cuts within newspapers and the dwindling of resources put into high-quality investigative journalism.  On top of all the other thought-provoking themes in Spotlight, it makes you wonder what stories are slipping through the cracks today.