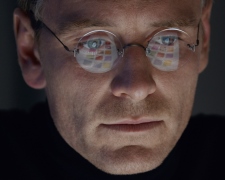 It’s not often we see two biopics about the same individual within the space of 3 years.  Released in mid-2013, Jobs starred Ashton Kutcher and chronicled the life of the famed technology entrepreneur up until the launch of the iPod in 2001.  The film was panned by critics (scoring just 27% on Rotten Tomatoes) and struggled to perform at the box office.

Sorkin has structured the film as a three act play.  It follows Jobs as he prepares for the public launch of three products – the Apple Macintosh in 1984, the NeXT Computer in 1988, and the iMac in 1998.  Roughly 40 minutes is spent on each segment.  There’s nothing in between except for a few odd flashbacks.

By taking this approach, Sorkin has created something that feels staged and unrealistic.  It’s as if every key person in Steve Jobs’ life wants to complain in the half-hour leading up to each launch.  His close associate (Rogen) is unhappy that he won’t acknowledge important employees in his speech.  His former girlfriend (Waterson) is pleading for financial support to care for their daughter.  His boss (Daniels) is worried about sales figures and the future of the company.  His loyal marketing guru (Winslet) is struggling to keep him focused on what is important.

The film’s repetitive message (at least from my perspective) is that Steve Jobs was a selfish control freak and an asshole.  The version we see of him in 1984 isn’t all that different from 1998.  He was obsessed with his own perception and took little interest in the well-being of others.  Not everyone agrees with this portrayal however.  Former Apple CEO John Sculley and long-time journalist Walt Mossberg (amongst others) have spoken publicly about a friendlier side to Jobs that isn’t shown in the movie.

Michael Fassbender is one of the best actors in the business and he does a first-rate job in replicating his character’s demeanour and mannerisms.  Helping shape his performance were numerous meetings with colleagues who knew Jobs closely.  It’s a shame the dialogue isn’t as authentic.  Boyle has shot the movie like a fast-paced, behind-the-scenes documentary but every character appears to have spent an hour choosing the perfect words before opening their mouths.

It’s not all bad.  There are a few good one-liners.  At the unveiling of the Macintosh, Jobs says “we blow this and IBM will own the next 50 years like a Batman villain.”  There’s another important moment where he compares himself to an orchestra conductor.

In a curious twist of fate, Steve Jobs also underperformed financially when released in the United States back in October.  Perhaps the marketing strategy didn’t work.  Then again, perhaps people aren’t interested in the story of an egocentric billionaire, despite the mark he has made on the world.