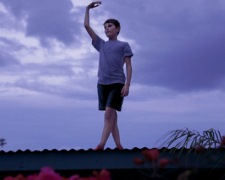 Cinema managers and film commentators are generally astute when it comes to box-office predictions but most were caught off guard by the success of Mrs. Carey’s Concert in 2011.  Focusing on the efforts of a high school musical teacher to organise a concert at the Sydney Opera House, the documentary made more than $1m and screened in Australian cinemas for more than 3 months.  That take was fuelled largely by positive word-of-mouth.

Those behind Wide Open Sky can only hope for an equally impressive result.  They’ve certainly followed in the same footsteps.  As we are told during the opening credits, Michelle Leonard is a music conductor who travels to rural schools across New South Wales and auditions more than 2,000 children for her Moorambilla Voices Choir.  Less than 10% will be chosen to perform at a season-ending concert in Coonamble.

It’s clear that Michelle isn’t doing this for fame and fortune.  The concert itself generates next-to-no revenue.  There’s no competition to win and there’s no lavish tour around Australia.  She simply wants to expose remote and disadvantaged kids to the world of music.  It’s as if the further you travel from capital cities, the harder it is for them to get such exposure.

Michelle’s other major motivation is get kids together and to build friendships.  In the lead up to the concert, a group of passionate volunteers help organise a 3-day training camp.  For many of the children, it’s their first time away from home – something that is both exciting and nerve wracking.  A lot of work goes on behind the scenes to make the experience as memorable as possible.

We hear from Michelle throughout the film but director Lisa Nicol makes the right decision to let the children do most of the talking.  It’s so cute to watch them audition and seeing them discover their talents.  When interviewed on camera, they come across as confident and honest.  Some of their responses are hilarious.  Other responses are quite touching.  As an example, Mack is a 13-year-old boy who talks about his struggles to make friends because he likes singing and dancing more than rugby league.

There’s not quite enough material to stretch this out to a full 90 minutes but Wide Open Sky is still a warm-hearted documentary that highlights the importance of artistic pursuits.  Schools struggle to find the time and funding to give them the attention they deserves.  The skills generated from these activities are also overlooked.  I don’t expect this film to “change the landscape” in Australia but it will hopefully get audiences thinking about the subject matter.