Review: Hunt For The Wilderpeople 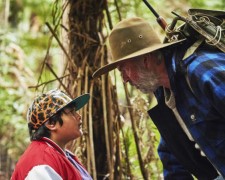 Born and raised in New Zealand, 40-year-old Taika Waititi has 3 previous writer-director credits to his name – Eagle vs Shark, Boy, and What We Do in the Shadows.  He’s quickly developed as reputation as wonderful storyteller.  Don’t just take my word for it.  Marvel has entrusted him to direct the new Thor movie (slated for release in 2017) that comes with a $170 million price tag.

Hunt for the Wilderpeople is his latest creation and when it opened in New Zealand last month, it set a new record for the highest grossing opening weekend for a locally made film.  It’s easy to see why the public has reacted so positively to it.  You’ll understand too if you find the time to see it over the next few weeks.  Audiences in the United States will get their chance when it opens there in late June.

The film begins by introducing us to a young kid, Ricky (Dennison), who has no parents and has had more than a few run-ins with the law.  He’s on the verge of being placed into juvenile detention but his social worker (House) has decided to give him one last opportunity.  A couple who live in a remote part of New Zealand have agreed to take him under their wing and help get his life back on track.

It’s a curious dynamic shared by these three characters in the early stages.  Bella (Te Wiata) could not be any more loving.  She talks a lot, she makes jokes, and there’s a great interlude where she catches a wild pig for dinner.  On the flip side, Uncle Hec (Neill) is a “scruffy white drifter who smells like methylated spirits.”  He was never interested in becoming a foster carer and is a “closed book” who would rather keep to himself.

A series of events brings Ricky and Uncle Hec together and the pair set out on a lengthy hike throughout New Zealand’s remote mountain ranges.  It’s here when the bulk of the film takes place.  They meet an assortment of odd characters and learn a lot more about each other.  Oh, and they’re also being pursued by the police for reasons that I won’t reveal in this review.

This is Waititi’s best film yet.  The way he mixes tones throughout the film is a thing of beauty.  This is best illustrated by a moment at a funeral where an unprepared priest (played by Waititi) is bumbling his way through a eulogy.  It should be a moment of great sadness but you’ll find yourself laughing at the same time.  As crazy as the scene appears, it was inspired by an actual funeral that Waititi once attended.

The film should also be praised for its cast.  I liken it to a Coen Brothers comedy where every character has a splash of quirkiness that makes them distinctive and memorable.  Rachel House is the ruthless social worker whose actions often contradict her words.  Oscar Knightley is the dopey police officer who is clearly out of his depth.  Rhys Darby is a crazy drifter who subscribes to every conspiracy theory ever written.

The main players deserve recognition also.  Defying his age, Julian Dennison has a great sense of comedic timing and has an array of funny facial expressions that he calls upon throughout the film.  Sam Neill is endearing as the grumpy uncle and Rima Te Wiata is adorable as the aunt who goes “above and beyond” to make Ricky feel welcome.

A fan of Australian films from the 1980s, Waititi has borrowed a few elements for his own use here.  This includes the electro-type film score and several scenes that involve a rotating camera.  It all adds up to a wonderful adventure fantasy that I can’t wait to see again.

You can read my chat with writer-director Taika Waititi by clicking here.