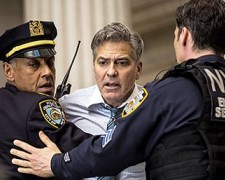 Lee Gates (Clooney) is the host of a popular finance television show that is broadcast across the United States.  He interviews CEOs of major listed companies and gives financial advice to those looking to make some money.  It’s hard to imagine how anyone could take Lee seriously given that he dresses up in costumes, uses silly sound effects, and spruiks “stock tips of the millennium”.  He’s about as trustworthy as the presenter of a late-night infomercial.

Kyle Buwell (O’Connell) is a young man who isn’t savvy when it comes to financial matters.  He inherited $60,000 from his late mother and proceeded to invest it entirely in IBIS Clear Capital after seeing Lee rave about the stock on his show.  The share price subsequently plummeted and the odd reason given by the company’s Chief Communications Officer (Balfe) was a “computer glitch” in an investment algorithm.  The bottom line – all of Kyle’s life savings had been lost in a single day.

Despite his obvious stupidity (who invests everything in a single stock?), the film is quick to paint Kyle as an innocent victim.  He knows there’s massive corruption on Wall Street and that there’s more to the demise of IBIS than is being revealed to the press.  To make his point, he storms onto the set of Lee’s live TV show and takes him hostage using a gun and an explosive device.  He’s not prepared to stand down until answers are provided.

The cameras keep rolling and we see people glued to television sets across the country.  The show’s gritty producer, Patty (Roberts), is working furiously behind the scenes to keep Lee calm and to find answers to Kyle’s questions about IBIS.  The police are also working on a plan to get inside the studio and shoot Kyle before the situation escalates further out of control.

Money Monster is very hard to take seriously.  It reminds me of fairy tales like Cinderella that give young girls hope that if they stay nice in the face of adversity, they’ll meet a handsome prince and live happily ever after.  Life isn’t that simple.

The recent global financial crisis, which I blame on simple human greed and a lack of government regulation, will have economic ramifications for decades to come.  Has the banking industry taken any responsibility?  Nope.  Has anyone gone to prison?  Nope.  I’m reminded of a line in the great documentary Inside Job where economist Nouriel Robini is asked why a thorough investigation into the financial services industry never took place.  His answer – “because then you’d find the culprits.”

Money Monster is correctly identifying that there’s a bunch of dodgy behaviour on Wall Street.  The film is well intentioned in that regard.  The problem is that it greatly simplifies the issue.  It wants audiences to think that the bad guys will ultimately admit their sins and the world will be better for it.  Sadly, this isn’t the case.  It lacks the depressing realism that made films like The Big Short and Margin Call so startling.

Even if you can overlook the financial elements, the way events unfold is also difficult to swallow.  Kyle breaks into the television studio with ridiculous ease.  The police make mistakes that would rival the Keystone Cops.  Perhaps the hardest element to buy into is Lee’s own naivety.  He’s been part of the industry for years.  Why is he so surprised to learn that IBIS has been untruthful?

Director Jodie Foster has done her best to create tension.  For example, there’s a great moment when Lee has to decide whether to pick up a gun that Kyle has inadvertently left on the desk.  Unfortunately, there’s only so much Foster could have done with a script as silly as this.