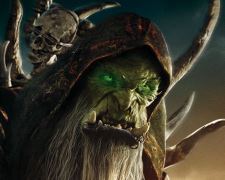 Warcraft: Orcs & Humans was a video game released back in 1994 that you played on your personal computer.  This is back in the day when you needed several CDs to install the program and the computer graphics weren’t all that flash.  It was set in the fictional world of Azeroth where human and orcs fought against each other in pursuit of victory.

I know this not from experience.  That’s just a summary of what I gleaned from a Wikipedia article.  I was never much of a video game player so I never played the 1994 release or any of the sequels that followed.  The same goes for the almost 30 Warcraft novels that have been published at a rapid rate since 2000.  This movie is my first introduction to the characters.

We’re told by way of introduction that there has been a war between humans and orcs for as long as people can remember.  This film chronicles where it all began.  The orcs had destroyed their own world and, after using a mysterious portal to travel to the land of Azeroth, they are intent on annihilating the human inhabitants and claiming the world for their own.

It’s just a matter of who has the strongest muscles and the most powerful weapons.  Magic also has a part to play.  The humans are led by King Llane (Cooper) who has called upon the services of the Guardian (Foster), a strange man who keeps a low-profile but has magical powers at his disposal when required.  The king’s expansive army is led by the wise Anduin Lothar (Fimmell) and he is assisted by a young sorcerer (Schnetzer) and a captured orc (Patton).

Almost as much time is spent following events from the perspective of the orcs.  They are ruled by Gul’dan, a ruthless dictator who doesn’t like being questioned or challenged.  He’s assembling his own army and is preparing to attack the humans.  Not all the orcs are villainous though.  Durotan leads an influential faction and he is wondering if there’s a possibility for humans and orcs to live together in harmony.

I’ve said this before but I often feel guilty when a studio takes a chance on something new and it doesn’t quite payoff.  Hollywood takes too few risks these days.  Warcraft: The Beginning contains plenty of detail… perhaps too much so.  It took me a long time to get my head around these characters and the way in which they weave their magic.  It was also a struggle to adjust to the orc’s muffled accents.

The orcs are the more interesting group.  The division amongst them makes for some interesting conversations.  More of this was required instead of the repetitive fight sequences that are heavy on special effects and not particularly exhilarating.  A few twists have been thrown into the finale but it’s a long wait to get there.

It seems that Chinese audiences were a lot more positive than me.  The film was released last weekend and grossed $156m USD in its first 5 days.  That’s the biggest opening in history for a movie in China.  In comparison, it made just $24m during its opening weekend in the United States.  The popularity of the video game in China in addition to a fierce marketing campaign paid huge dividends.  Those figures alone will ensure a sequel.  Hopefully a few more subplots will be wrapped up next time.