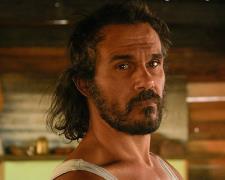 Australia has a history of making great movies with indigenous characters in leading roles.  Ten Canoes (2006) was set in pre-Western times and focused on the conflict between two tribes.  Samson & Delilah (2009) followed two troubled 14-year-olds from a poor community in remote Australia.  The Sapphires (2012) was based on the true story of a group of musicians who performed for troops during the Vietnam War.  All three won the AACTA Award (previously known as the AFI Award) for best film.

The problem for Australia is that we don’t seem to make enough films centred on indigenous characters.  That’s the opinion of director Ivan Sen who is doing his best to balance the scales.  The indigenous filmmaker now has several acclaimed movies under his belt including Beneath Clouds (2002), Toomelah (2011) and Mystery Road (2013).

His latest outing, Goldstone, was selected to open the prestigious Sydney Film Festival last month and has been showered with praise since.  It’s a spin-off from Mystery Road in that it features the same lead – Aaron Pedersen as indigenous Detective Jay Swan.  The setting is a remote mining community that has next-to-no infrastructure.  The police, the mayor and the mining workers all operate out of rundown demountable buildings.  There’s not a lot to see or do.

Jay has arrived in town to investigate the disappearance of a young Asian girl who has been missing for 6 months.  His entrance is anything but glamorous.  He spends his first night in a jail cell after being pulled over for drink driving by the town’s sole police officer, Josh (Russell).  Not long after, his caravan is peppered with bullets by unknown assailants.  It’s clear that something is amiss in Goldstone and Jay is warned “to be careful where you step as there are plenty of snakes about.”

His investigations lead him to several individuals with questionable intentions.  The mayor (Weaver) is pressing hard for an expansion to the gold mine so as to pump valuable revenue into the local economy.  The mine’s manager (Wenham) is doing everything he can to sway the opinion of an indigenous leader (Lewis) who is critical to the approval process.  A local businessman is running a shady bar that serves as a brothel for the mining staff.

Pedersen is terrific as the film’s flawed hero and he is well-assisted by rising star Alex Russell (Chronicle).  Tommy Lewis is the pick of the supporting cast as the indigenous leader who, in trying to please everyone, loses his moral compass.  Sen also makes great use of the remote location with some beautiful shots (the drone footage is particularly impressive) and some tense chase sequences.

The film may be laced with an element of truth but it comes across as corny in places.  Jacki Weaver and David Wenham are not subtle in portraying themselves as villainous individuals.  It feels like Weaver is portraying a skewed, over-the-top version of the character that earned her an Oscar nomination in Animal Kingdom.

Selected to open the prestigious Sydney Film Festival last month, Goldstone has its weaknesses but it’s still an impressive action-thriller from Sen who puts a fresh spin on a well-used Hollywood formula.

You can read my chat with writer-director Ivan Sen by clicking here.