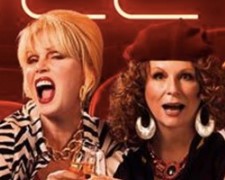 As someone completely new to Absolutely Fabulous, I look at these much-loved characters in a mild state of shock.  Edina Monsoon (Saunders) is a hapless, struggling PR agent who is mocked by her colleagues in the industry.  She rarely works and spends most of her time shopping, drinking and socialising.  Her best friend, Patsy Stone (Lumley), is no better.  She’s the party-loving, cocaine-snorting, chain-smoking fashion editor for a leading magazine.

Their lives up until this point have been funded by Edina’s wealthy ex-husband but unfortunately, those days are about to come to an end.  There’s no money left.  Their expansive champagne cabinet is empty and there are no new clothes for their wardrobes.  Edina laments that the credit cards “are broken” as if they’re some kind of fixable toy.  She tries to sell her autobiography to a publisher but that too ends in failure.  Edina is told that “her life may be worth living but it’s certainly not worth reading about.”

This is clearly a film for those who are fans of the series.  There have been 32 episodes and 7 television specials since it debuted on the BBC in 1992.  Many characters return for this feature film including Julia Sawalha as Edina’s daughter, June Whitfield as her mother, and Jane Horrocks as her dopey personal assistant.  There are also cameos from the likes of Jon Hamm and Rebel Wilson (which I haven’t spoiled since they’re already shown in the trailer).

After about 30 minutes of character reintroductions, the film finally arrives at its key plot point.  Supermodel Kate Moss (playing herself) is looking for a new agent and Edina has her sights on the role.  She rushes up to her at a soirée in London and in the blink of an eye Moss falls off a ledge into the River Thames.  She is presumed drowned and a “well-coordinated lynch mob” goes after Edina.  Whatever reputation she had left, is now in tatters.

It becomes apparent in the later stages that this is a film to be enjoyed for its utter craziness than its coherent narrative.  Supporting players slip in and out of the picture and it culminates with a trip to the French Riviera.  By this point, the Kate Moss storyline is almost forgotten.  Long-time supporters of the show will enjoy catching up with the eccentric characters.  Others may be left scratching their head and wondering if this is the female equivalent of a Hunter S. Thompson novel.

It’s obvious that the cast had fun making this.  My enthusiasm levels were not quite has high.