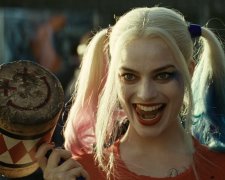 Having seen the trailer umpteen times, Suicide Squad had the appearance of something fresh and new.  Instead of a traditional “good guys versus bad guys” action spectacle, it was going to blur the lines and make everyone a villain.  Regrettably, the finished product did not align with my expectations.  This is a tiring film that is low on laughs and high on confusion.

Following on from Batman v Superman: Dawn of Justice, it begins with government official Amanda Waller (Davis) offering a chilling warning to her military counterparts – “the next Superman might not share our values.”  She wants to assemble a team of powerful “bad guys” that can be used to save Midway City if it should ever be attacked by another supernatural being.

The idea didn’t make a lot of sense to me.  In the opening scenes, we learn how some of these villains were captured and incarcerated in the first place.  Deadshot (Smith) is a marksman who never misses his target.  Harley Quinn (Robbie) was a leading doctor in a mental asylum until led astray by the Joker (Leto).  Both were apprehended by Batman and hence my bewilderment.  If Batman can outsmart these two, why hasn’t Amanda enlisted the services of Batman instead?  Further, if he wasn’t available, why take the risk on these lunatics over the loyal, hardworking soldiers already at their disposal?

The contrived narrative gets even messier when it comes to the film’s actual villain.  It’s not the Joker as advertisements lead you to believe.  It’s apparent that more will be made of his character in future instalments.  It therefore falls upon Cara Delevingne (Paper Towns) to wreak havoc as a not-so-intimidating witch who has been locked up for hundreds of years.  She’s created a bizarre “floating ring of trash in the sky” and is keen to annihilate the planet for no reason in particular.

It’s a shame the movie amounts to so little because there are some great performances.  Will Smith (Ali) and Australian Margo Robbie (The Wolf of Wall Street) get the most screen time and the best of the one-liners.  You’re never quite sure where they fit on the scale between good and evil.  Robbie isn’t the only Aussie in the cast.  Jai Courtney (Jack Reacher) plays Boomerang, an expert thief who apparently has robbed every bank in Australia.  He’s appropriately introduced using the iconic AC/DC song “Dirty Deeds Done Dirty Cheap”.

There are way too many characters here though.  Just when you think you’ve got your head wrapped around them all, another enters the mix (e.g. Karen Fukuhara who pops out of nowhere as a martial arts guru).  Writer-director David Ayer (Fury) isn’t afraid to kill people off (that’s a good thing) but it’s hard to care when you don’t know their backstory and when the action scenes have been so chaotically assembled.

Changes were reportedly made to Suicide Squad following the huge success of Deadpool back in February.  The studio was looking for more humour and less drama.  They can’t have made too many alterations as the finished product is still a largely bland affair.  As is tradition, the closing credits provide a tease of the next instalment.  It has to be more entertaining than this.