Review: The Secret Life of Pets 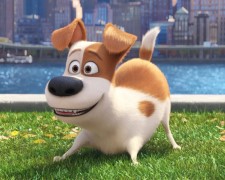 In 1995, Toy Story posed the question – what do kids’ toys get up to when there’s no one else around?  Illumination Entertainment, the production company behind the animated Despicable Me franchise, have taken that concept and applied it to the world of pets.  When owners close the front door and head to work, what adventures keep their beloved animals occupied?

Our leading man in this case is a Jack Russell terrier named Max (voiced by Louis C.K.)  He describes himself as the “luckiest dog in New York” because he has such a loving, caring, affectionate owner, Katie.  They live together in a spacious high-rise apartment with a beautiful view of Manhattan.  When left alone during the day, Max uses the external fire stairs to catch up with other animals in the building.  They include cats, birds, fish, hamsters and many other dogs.

Max’s idyllic world is upended when Katie brings home a new pet – a giant shaggy dog named Duke (Stonestreet).  Displaying his selfish side, Max is threatened by Duke and is worried that he’ll play second fiddle in the battle for Katie’s affections.  His problems are about to get much bigger.  Taken to the local park by a professional dog walker, Max and Duke fight and then become lost in New York City.  It’s time to tap into an iconic movie theme – two adversaries teaming up in pursuit of a common good.

Their efforts to find a way home won’t be easy.  They are led into the sewers by a villainous rabbit named Snowball (Hart) with a hatred for the upside world.  He was once a magician’s rabbit but has harboured a grudge against all humans after being discarded by his owner (bunny tricks went out of fashion).  He now leads a group of discarded animals that go by the name of The Flushed Pets.

Not everyone in this ensemble has a darker side.  The friendly animals from Max’s apartment building have bandied together, risked their lives, and gone in search of him.  They include a white Pomeranian dog with a secret love interest, an apathetic tabby cat who loves to raid her owner’s fridge and a feisty hawk (voiced by the iconic Albert Brooks) with mixed motives.

Kids should be entertained by the film’s light-hearted nature but the story doesn’t offer much in the way of emotion.  That’s not a wholly bad thing.  There’s a great scene where Max and Duke break into a sausage factory and go on a feast to the backdrop of the song “We Go Together” from Grease.  My point is that you’ll laugh at these individual moments but they seem to have more focus than the broader, more heartfelt narrative of two dogs reconciling and finding a way home.

It’s hard not to fall love with these characters though.  The varied voices of Louis C.K., Kevin Hart, Steve Coogan and Albert Brooks are big help.  Credit also goes to the animation team.  Animals are cute but talking, animated animals are even cuter.