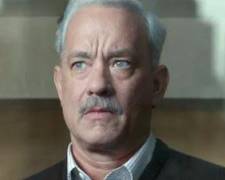 There’s a moment in Sully when a member of the National Transport Safety Board (NTSB) listens to the cockpit voice recorder aboard US Airways Flight 1549.  He remarks that he’s investigated many plane crashes but this is the first where he’s listened to the recording and then had an opportunity to question the pilots.

That is a very good thing.  For a commercial airliner to experience a catastrophic failure and then find a way to land safely with no fatalities is remarkable.  A character sums it up best by saying “it’s been a while since New York City has news this good… especially with an airplane in it."  The event, which took place in early 2009, was dubbed the “Miracle on the Hudson” by New York State Governor David Paterson.

The most interesting aspect of Clint Eastwood’s film is the flight itself.  The plane left LaGuardia Airport in the mid-afternoon with 155 passengers on board.  Three minutes later, it struck a flock of birds and thrust was lost on both engines.  Captain Chesley “Sully” Sullenberger (Hanks), a pilot with 42 years of experience, quickly realised he couldn’t get the plane back to the airport.  His only option was to attempt an emergency water landing in the Hudson River.

Todd Komarnicki’s (Perfect Stranger) screenplay offers numerous perspectives.  We hear the thoughts of Sully and his co-pilot (Eckhart) as they size up the situation.  We watch the air traffic controllers assess available options.  We see the passengers thinking the worst but hoping for the best.  The film also acknowledges the work of the NYPD and ferry drivers who brave freezing waters to play a part in the rescue effort.

A major limitation in bringing this tale to the screen is that the flight itself only lasted for 5 minutes.  So while the crash landing sequence will grip audiences, it doesn’t have the stamina to match other plane-drama films such as Paul Greengrass’s United 93 (still a masterpiece).  The remainder of the film is spent chronicling Sully’s upbringing, the media attention following the event, and the investigation by the NTSB.

This is where the film suffers.  It’s apparent that events have been altered to simplify the story and make it more Hollywood-friendly.  The “court room” finale is borderline laughable.  The NTSB puts pressure on Sully to admit that he made a mistake and that the plane had the capability to return safely to the airport.  When Sully exposes the basic flaws in their assumptions (which a high school student could figure out), it makes the NTSB look like incompetent fools.  Is this what really took place?

The subplots involving Sully’s flying history and the strained relationship with his wife (played by Laura Linney) also feel superfluous.  We are shown fleeting flashbacks and quick phone conversations that don’t add much to the narrative or our insight into Sully.  The same can be said of dream-type sequences that try to illustrate the difficulty Sully is having in adjusting to post-accident life.

Let me make it clear – Captain Chesley Sullenberger is a hero and a terrific guy.  This film doesn’t do him justice though.  Several television shows and documentaries have already been made which chronicle US Airways Flight 1549 and they offer more insight than this cheesy, fictionalised version.