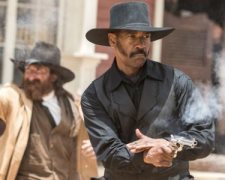 I’ve said this far too often but one of the most important elements in an action film is a great villain.  This box is ticked repeatedly during the opening scenes of The Magnificent Seven.  Peter Sarsgaard plays Bartholomew Bogue – a cunning, corrupt businessman who cares for no one other than himself.

The year is 1879 and he rides into the small town of Rose Creek with a specific agenda.  He wants to steal land from rightful owners and use it for gold mining.  There’s no point arguing as Bogue has numerous “hired guns” on his payroll who he uses to squash dissenters.  The local sheriff is of no value either given the substantial cash bribes he has received.  When a priest politely speaks up in defence of the townsfolk, Bogue responds by burning down his church.

He is a horrid, disgusting individual... and I say that as a compliment to Sarsgaard.  The first thought that came into my head after the opening 15 minutes – “I can’t wait until the end of the film where you finally get what you deserve.”  I know that sounds cheesy but it’s the point of movies like this.  Why watch if it doesn’t get your juices flowing and you don’t care about anyone’s fate?

Unfortunately, things get sluggish during the film’s lengthy second act.  A group of seven men, driven by a mix of money and goodwill, have taken it upon themselves to be the heroes in this adventure.  They are led by Sam Chisolm (Washington), a bounty hunter who realises that brains will be just as important as brawn in defeating Bogue and his expansive army.

This group of characters isn’t as interesting as you might hope.  They’re an eclectic group with the screenplay struggling to give them all something to do.  Denzel Washington is the smart guy, Chris Pratt is the funny guy, Vincent D’Onofrio is the strange guy, and Byung-hun Lee is the silent guy.  Rounding out the pack are Ethan Hawke, Manuel Garcia-Rulfo and Martin Sensmeier.

There’s too much foreplay here.  Most of the film is spent watching our heroes get to know each other and prepare for battle.  I’d have preferred editor John Refoua (Avatar) to leave more on the cutting room floor given the film’s 133 minute running time.  Still, the action finale is worth the price of admission.  The body count is high and the shrewd strategy adopted by The Magnificent Seven pays dividends.

As a lover of movie music, the film is significant as it marks the final work of Academy Award winning composer James Horner (Titanic) who died in a plane crash in June 2015.  At the time, he’d completed several tracks for director Antoine Fuqua that feature trumpets, snare drums, and shakuhachi flute – all instruments that Horner fans will recognise.  The final score was completed with the help of Simon Franglen, a close working colleague of Horner.

This is the third time that this tale has been brought to the screen.  Akira Kurosawa’s Seven Samurai (1954) is still regarded as one of the great movies in the history of cinema.  The American remake from 1960 didn’t receive much acclaim but still found an audience thanks to a cast that included Yul Brynner, Steve McQueen and Charles Bronson.  This latest remake is far from perfect but in a time when westerns are few and far between, it provides a nice throwback to a forgotten genre.