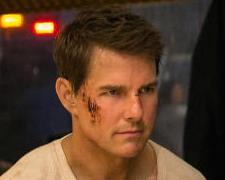 You don’t find Jack Reacher.  He finds you.  Those that have read the Lee Child novels or seen the 2012 film will know that’s the essence of this character.  He’s a former high flier in the U.S. military who quit several years ago because he “woke up one morning and uniform didn’t fit.”  He now lives in the shadows with no fixed address and no identification.  He pops up when the time is right to help put bad guys behind bars and dish out his own brand of justice.

Child has written more than 20 books about the fictitious Jack Reacher.  After the moderate success of the earlier movie, the writing team picked out Child’s 18th novel in the series to bring to the big screen.  This time around, Reacher is helping Major Susan Turner (Smulders) who has been charged with treason – a crime she didn’t commit.  As you can imagine, they need to ascertain why she has been framed and who’s behind it.

I was a fan of Christopher McQuarrie’s original film from 2012 as it was a little different from your standard action fare.  At the time, I wrote that Cruise had created a protagonist that was “full of personality” with a “sharp sense of humour”.  McQuarrie also gave a film as sense of style with a great opening sequence and some well-selected camera angles.

Jack Reacher: Never Go Back doesn’t feel quite as exciting.  Perhaps it’s the inevitable letdown that comes with most sequels or perhaps it’s just not as good.  There’s a different director at the helm this time around.  Ed Zwick had previously worked with Tom Cruise on The Last Samurai (2003) and was clearly keen to do so again.

The script isn’t as compelling this time around.  You’ve got some stereotypical, Eastern European type villains who are up to no good and are prepared to kill all and sundry.  In trying to show Reacher’s softer side, a subplot is introduced where he learns he may be the father of a teenager girl.  He can kill several armed men but family bonding is not his strong suit.

Let me caveat my disappointment by saying this is still worth a look.  It comes with a few snazzy one-liners such as an early scene where Reacher confronts someone and smugly proclaims that “I’m the guy you didn’t count on.”  Cruise does his best to create a character that is fun, strong and determined.  It’ll be interesting to see if this franchise has the legs for another instalment.