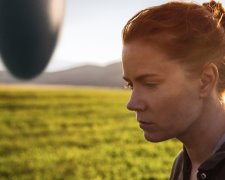 When it comes to aliens and science fiction, one of my all-time favourite movies is Contact, the 1997 release starring Jodie Foster and directed by Robert Zemeckis.  Instead of portraying a full-blown alien attack and relying on huge action sequences (like Independence Day), it was a more dramatic film that looked at what would happen if a peaceful alien race was looking to reach out to humans and make “first contact”.

Arrival, directed by Denis Villeneuve (Prisoners, Sicario), has been made from the same mould.  It begins with a world changing event.  12 alien vessels have descended upon Earth and are hovering above different parts of the planet.  There doesn’t appear to be any pattern to their locations but one has parked itself in a grassy, isolated field in Montana.

It’s one of those moments where time seems to stop and the world comes to a standstill.  We see footage from a university where a normally packed lecture theatre is almost empty.  Everyone else is huddled outside watching the news on their phones and television screens.  The days that follow become more and more troubling.  Citizens panic, grocery stores are looted, gas stations run out of petrol, and the government is forced to impose a night time curfew.  It’s a tense time.

Based on the short story by Ted Chiang, Arrival is told from the perspective of Dr Louise Banks (Adams), a renowned academic who lectures on language and linguistics.  Having previously performed translation work for the U.S. military, she is called in by Colonel Weber (Whitaker) to help make contact with the alien lifeforms.

It’s a situation that requires Louise to take more than a few deep breaths.  She is taken aboard the spacecraft where she comes face-to-face with the alien creatures.  The only thing separating them is a thick sheet of glass.  It’s clear they want to communicate but Louise needs to work out how.  Is it best to attack the problem by speaking or by using words and visual imagery?  Also helping is a scientist (Renner) who specialises in mathematics.

Action junkies may be disappointed but this is an interesting exploration of how humans would react if presented with a similar real life situation.  If a more advanced alien race did visit Earth, how much could we learn from them and how big an impact would it have on our own existence?  Would it alter science in a radical way?  What would religious leaders have to say?

The film also delves into the darker elements of human nature.  It taps into the theme that the biggest danger to our planet is not aliens but rather, it is us.  We see governments around the world divided on how to approach the situation.  Are the aliens truly friendly and how much should be shared with them?  Further, how much should be revealed to the nervous public who are thirsty for information?  As rumours spread and the conspiracy theorists weigh in, it all becomes harder and harder for the U.S. government to control.

I love the concept of this movie but it’s a little clunky in how it gets its message across.  It’s trying to pack a lot inside of two hours and parts are rushed.  The best example is the deteriorating relationship between some countries as the days and weeks drag on.  We know there’s tension but we hardly see any interaction between their representatives.  Would a country actually be serious enough to sever all forms of communication with others?

Perhaps the reason this area doesn’t get the focus it deserves is because this is a film with Louise at the centre.  It’s about the effect the aliens have on her and how she has a role to play in helping advance humanity.  That becomes apparent during the later scenes and Amy Adams deserves credit for another emotive performance.

Complete with another blaring film score from Jóhann Jóhannsson (who worked with Villeneuve on Sicario), Arrival is going to divide audiences.  Don’t go in thinking you can sit back, relax, and enjoy some action-heavy entertainment.  Your mind will be put to work.