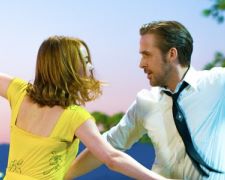 At the start of 2014, few cinephiles were familiar with name Damien Chazelle.  The 28-year-old had one directorial credit to his name, Guy and Madeline on a Park Bench, which opened in 5 theatres in the United States and grossed a total of $35,556.  One year later, he was one of the hottest properties in the film world.  Whiplash, his sophomore feature, took in roughly $50 million internationally and won 3 Academy Awards.

Chazelle and fellow Harvard classmate Justin Hurwitz came up with a script for La La Land in 2010 but film studios had padlocked their doors.  The majority of musicals which have thrived at the box-office in recent years were all based on existing, well-known Broadway productions – Chicago, Les Miserables, Into the Woods, Hairspray and Mamma Mia!  The idea of an original, modern-day musical from an unknown filmmaker sounded like a financial train wreck.  I wouldn’t have invested either!

It’s funny how the world works sometimes.  La La Land won the Audience Award at the prestigious Toronto Film Festival back in September and is sure to be nominated for a slew of Oscars next month.  We have the benefit of hindsight but you still have to question the vision of studio heads who all turned down Chazelle’s project.  If not for the success of Whiplash, this script would still be sitting in Chazelle’s bottom drawer.

As for the premises, Mia (Stone) works at a café located on the Warner Bros. studio in Los Angeles.  It’s a job she hopes is temporary.  The huge poster of Grace Kelly on her bedroom wall provides more than enough insight into Mia’s hopes and dreams.  She fell in love with moves as a young child and has wanted to be an actress ever since.  Despite an obvious talent and numerous auditions, she just can’t get her foot in the door.

Sebastian (Gosling) has lofty goals himself but they’re related to a different artistic craft.  A gifted pianist and songwriter, Sebastian wants to buy and run his own jazz club.  His problem is money, or the lack thereof.  He drives in an uninsured car and he’s accepted a small, unfulfilling job in a restaurant just so he can pay his other bills.  He articulately describes his situation by telling his sister (DeWitt) that “I’m letting life hit me until it gets tired.”

Mia and Sebastian meet in serendipitous circumstances and a relationship ensues.  The first two acts are all very light and charming and you could argue that they’re designed for the cheesy romantics among us.  However, the film’s tone shifts in the final half-hour and it’s here where the film makes its impact.  Damien Chazelle has something to say about the choices we make in life and the directions they take us in (without giving too much away).

Lovers of classic musicals are likely to be drawn to the material.  Chazelle admits to being influenced by films such as the Palm D’or winning The Umbrellas of Cherbourg (1964).  La La Land opens with two big, bright dance numbers but what follows is a little more nuanced.  There are moments when dialogue takes a back seat and the beautiful music of composter Justin Hurwitz controls the mood.  In contrast, there are emotional conversations where no soundtrack is required at all.  The simple sound of the needle on a record player as it reaches its climax is all that’s needed.

The film isn’t without its weaknesses.  It’s a relatively simple storyline that goes through several lulls before its powerful epilogue.  Mia and Sebastian share fleeting discussions with supporting characters that are rushed to the point of being superfluous.  Examples include scenes with Rosemarie DeWitt (as Sebastian’s sister) and Finn Wittrock (as Mia’s boyfriend).

La La Land still amazes from a technical perspective.  The use of lighting and music is pin point.  Parts of the film are heavily edited to get the blood pumping (like the opening song) whereas others require no editing at all (such as a single-shot dance number atop a hill overlooking Los Angeles).  The casting of Emma Stone and Ryan Gosling is perhaps the film’s strongest element.  It’s the third time they’ve worked together on screen and the chemistry is evident.

Easy on the eyes and tough on the heart, La La Land is a film I could watch again and again.