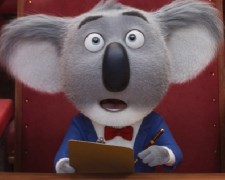 Ever since he was 6 years old, koala Buster Moon (McConaughey) has been enamoured with the stage.  He’s followed through on that dream and now owns a famous old theatre which has been home to several productions.  Unfortunately, his passion hasn’t translated into financial success.  He owes money “all over town” and the bank is top of the list.  His loyal assistant, an iguana named Miss Crawley (Jennings), is helping keep the credits at bay.

Desperate for a hit, Buster comes up with the idea of a singing competition.  It’ll follow in the footsteps of American Idol and The X-Factor but instead of being televised, people will buy tickets and see it live in his theatre.  The prize was supposed to be a mere $1,000 but a typo from Miss Crawley, who accidentally puts $100,000 on the promotional flyer, sends the whole town into a spin.

As we see from a whirlwind segment that introduces the characters, there are plenty looking to get their hands on the prizemoney.  Johnny (Egerton) is a gorilla looking to get away from his criminal father.  Meena (Kelly) is an elephant who struggles when it comes to self-confidence.  Rosita (Witherspoon) is a pig who needs a hobby to help provide space from her 25 children.  Mike (MacFarlane) is a cocky, arrogant mouse following in the footsteps of Frank Sanatra.  Ash (Johansson) is a rock-music loving porcupine in a troubled relationship.

It’s a tricky job trying to balance up the many storylines but writer-director Garth Jennings (The Hitchhiker’s Guide to the Galaxy, Son of Rambow) has done a good job.  Kids shouldn’t have too much trouble keeping up.  My pick of the group was Miss Crawley as the goofy iguana but it’s easy to see why others will have a different favourite as all of these characters are fun and adorable.  The voice cast is strong too.

Given the film’s title, it’s no surprise that it contains an abundance of music.  There are scenes where a different song is seemingly played every 20 seconds.  It’s this element of the movie where Jennings has tried to broaden appeal by using a mix of old and new.  Younger crowds will be humming to the songs of Taylor Swift, Carly Rae Jepsen and Ariana Grande.  Those with a few more years under the belt will recognise the lyrics of Paul McCartney, Elton John, Leonard Cohen and Irving Berlin.

Sing is entertaining but the third and final act is its weakest.  Instead of throwing in a few surprises or a bit more drama, it culminates with a lengthy sing-a-thon and not much else.  It’s a safe ending for what is a safe animated feature.

You can read my interview with writer-director Garth Jennings by clicking here.