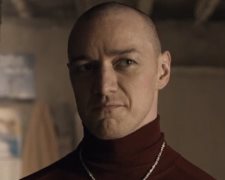 Split begins with a kidnapping.  A man (McAvoy) drugs three teenage girls while they waiting in the carpark of a shopping centre.  When they wake, they find themselves locked in a small, windowless room with no idea what’s going on.  They try to fight their way out but it’s clear that the man is far too strong.

At a first glance, the kidnapper appears to be a sadist monster.  It’s not quite that simple though.  He suffers from dissociative identity disorder and has 23 different personalities that appear at different times.  Some are cruel whilst others are kind.  He’s one of the more interesting villains that we’ve seen in recent times.  Despite his crimes, there are times when you may actually like and empathise with some of his personas.

This isn’t your standard Hollywood thriller.  Just when you think it’s about the girls and their escape plan, another subplot becomes the focus.  Dr Karen Fletcher (Buckley), the man’s psychiatrist for a number of years, has become fascinated by his condition.  For example, she can’t fathom how one identity can be allergic to bee stings while the other is not.  It implies that a mind can have more power over the body and she’s keen to her findings with her counterparts.

If you love your movies, you’ll know that have to be paying attention when watching any film from director M. Night Shyamalan (The Sixth Sense).  Not all of his films work but he thinks outside the square and keeps audiences on their toes.  Split is no different.  I thought to myself numerous times – “where is this going?”  Are the girls going to find a way out?  Is the doctor going to supress the man’s darker personalities?  I had no idea.

The film’s most positive quality is the performance turned in by James McAvoy.  It’s a dream role given he plays so many different characters.  I actually lost count.  Betty Buckley and Anya Taylor-Joy also impress with their respective roles.  He’s not on quite the same level as the Coen Brothers but Shyamalan has a knack for finding largely unknown actors and using them to create distinctive, memorable characters.

There’s a lot of great foreplay on offer here but whilst I commend Shyamalan for his creativity, the rushed ending is a letdown.  Not everyone will agree with that statement and I sense there will be varying opinions.  It’s hard to say too much without using spoilers so I’ll be as cryptic as I can.  The film offers an eye-raising punchline but it’s a shame it ends so abruptly.  I could easily have watched another half-hour.