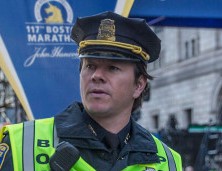 It hasn’t been long since the events of 15 April 2013.  I can still remember following the tragedy and subsequent manhunt through news websites.  Two bombs were detonated near the finish line of the Boston Marathon.  Three people were killed and roughly 260 other spectators in the area were injured.  The authorities faced increasing pressure to identify those responsible and after a speedy yet thorough investigation, they got the two men they were looking for.

It’s no surprise to see this story brought to the screen by writer-director Peter Berg and star Mark Wahlberg.  It marks their third collaboration after Lone Survivor, the tale of Navy SEALs trying to kill a Taliban leader in Afghanistan, and Deepwater Horizon, the story of workers on an oil rig who had to battle for survival after a huge explosion.  These two are clearly attracted to real-life action-thrillers about heroes and the American spirit.

Berg begins his film by introducing us to all the characters up front.  We don’t know what part they’ll all play but he wants to create a splash of intrigue.  Most of it revolves around Mark Wahlberg – a sergeant with the Boston Police Department who has been disciplined for past indiscretions (which we’re not told about).  He’s been stationed at the finish line and his role is simply to make things run smoothly and deal with any issues that arise.  He’s not particularly keen to be there.

John Goodman is the friendly Police Commissioner.  J.K. Simmons is a laid-back sergeant from a nearby city.  Vincent Curatola is the no-nonsense mayor.  Michelle Monaghan plays Wahlberg’s wife who watches things unfold at home.  Jimmy Yang is a uni student trying to find a girlfriend.  Rachel Brosnahan and Christopher O’Shea are a married couple watching the marathon.  Kevin Bacon is an FBI Special Agent.  Alex Wolff and Themo Melikidze play the two terrorists responsible for the bombings.  We see things unfold from all of their perspectives.

The film’s most interesting element is the behind-the-scenes look at the unfolding investigation.  One of the most pivotal scenes involves different authorities arguing about whether to release photographs of the two suspects.  They could not be identified from the grainy CCTV footage and the hope was that a member of the public would recognise them and come forward.  However, the photos’ release could come at a cost if it spooks the suspects into fleeing or detonating more bombs.

There’s a nice moment at the end of Berg’s film where hear from the real-life people who are depicted in the movie.  They speak of the great city of Boston and the resilience shown in the aftermath of the attack.  One person noticeably absent is the police sergeant played by Wahlberg.  That’s because no such person actually existed.  Many police officers were involved but in the interests of condensing the narrative into two hours, their actions were melded together into a single fictional character.  It explains why he’s always in the right place at the right time.

The backstory to Wahlberg’s character and the interplay with his wife is a little dull and clichéd.  Putting that aside, Patriots Day is a watchable film that tries not to delve into politics (although it goes close some times) and pays tribute to those who risk their lives to keep us all safe from harm.