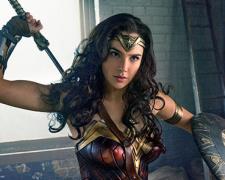 Too many superhero movies are being produced today.  Some are still likeable but there’s a growing familiarity to their style and storylines.  The villains are up to the same old tricks and the heroes always find a way to defeat them whilst up against near-impossible odds.  When something doesn’t quite work out the box-office, the studio puts the franchise on ice and reboots it a few years later with a fresh cast.

All of that said, there are reasons to be excited about Wonder Woman.  For starters, this is the first time a live action film has been made about this famous comic book character.  You won’t be sitting through another Batman or Spider-Man origin tale that you’ve seen before.  Further, Patty Jenkins (Monster) is the first ever female to direct a movie within the Marvel or DC Comics universe.

It has been a long journey to get to this point.  One of Jenkins’ favourite movies growing up was Richard Donner’s Superman (the 1978 release with Christopher Reeve).  She directed short films about superheros and had been pitching her idea of a Wonder Woman movie since the early 2000s.

The stars never aligned though.  She made Monster, took time off to have a baby and couldn’t convince the studio about her vision.  Sexism also played a part.  Some still have a deluded view that only men like action movies and so only men should make them.  This is just the second time in history that a woman has solo-directed a live action film with a budget exceeding $100 million (Kathryn Bigelow was the first in 2002 with K-19: The Widowmaker).

This 141 minute introduction to Wonder Woman is framed as an origin story and plenty of background information is provided in the opening act.  Diana (her original name) was born and raised on a remote island that is home to a powerful group of female warriors known as Amazons.  They were created by the mighty god Zeus to help protect the planet should the sinister god Aries ever try to destroy mankind.  It’s a shame the island is kept hidden from the public because it’d be a great holiday destination with its stunning views, large waterfalls and crystal clear water.

Set during World War I, life on the island is disrupted when a British Air Force pilot crashes just off the coastline.  He is rescued by Diana and brought ashore.  It’s the first time in her life that she’s come face-to-face with a man.  The pilot, Captain Steve Trevor (Pine), speaks about the horrors of the “great war” and how he must return to London to pass on valuable intelligence information to his superiors.

Diana believes she has a part to play.  She senses that the war must be the result of Aries’ influence on the invading German soldiers and so she grabs her rope, sword and shield and joins Trevor in London.  Having never spent a single moment off her idyllic island, her naïve interactions with those in the “real world” provide an important injection of laughs.  It’d be the equivalent of me travelling back in time 500 years and trying to fit in – not an easy task.

There are other characters in the mix.  General Ludendroff (Huston) and Doctor Poison (Anaya) are the prominent villains as they develop chemical weapons to give Germany the upper hand.  The list of allies include Trevor’s take-no-nonsense secretary (Davis) and a small team of soldiers who join Trevor and Diana as they head to the front line and prepare for battle.

The film’s two major strengths come down to the two most important ingredients – cast and story.  32-year-old Israeli actress Gal Gadot (Fast & Furious) is incredibly convincing in the lead role and has created a distinctive superhero who is strong and intelligent.  Chris Pine (Star Trek) also impresses in a role that requires him to call on both his dramatic and comedic skills.  They’re a great pair.

Aside from the necessary finale, the movie doesn’t get bogged down with long-winded action sequences.  Rather, the focus is on telling an interesting story that blends Greek mythology with actual history.  It’s reminiscent of Marvel’s Captain America: The First Avenger which placed its heroes in a war-time setting.  The screenplay also includes insightful duologues between Diana and Trevor as they debate the link between war and man.

We’ll see Wonder Woman again on screen in November when she teams up with her fellow superheroes in Justice League.  For the time being, we can enjoy her terrific origin story.