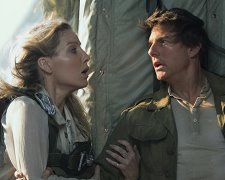 We’re accustomed to Tom Cruise playing the action hero who saves the world.  I’m referring to Mission: Impossible, Jack Reacher and Edge of Tomorrow.  His character here, Nick Morton, isn’t quite as nice.  He describes himself as a “liberator of precious antiquities”.  He goes into war torn countries and rescues and/or steals priceless artefacts to profit from in the western world.

Nick’s latest mission has taken him to the Middle East where he has uncovered a hidden tomb that is home to Ahmanet (Boutella), an Egyptian goddess who has been erased from the history books.  She once had her sights on a powerful throne but she lost her position as heir after her father had a son.  Suffice to say she didn’t react well.  She made a pact with the “darkness” and had her family killed.  Officials punished Ahmanet by burying her alive as a mummy.

After that quick history lesson, it’s time to get back to the current day.  Nick has reluctantly teamed up with a legitimate archaeologist, Jenny Halsey (Wallis), and they intend to take the mummy’s sarcophagus back to London for further study.  Tragically, their military plane crashes and while Jenny was able to escape via a parachute, Nick was killed on impact.

Don’t fret.  If you’re going to pay Tom Cruise millions of dollars, you’re not going to kill him inside the first 30 minutes of your film.  Nick wakes up in the morgue without a scratch on him.  His survival is some kind of weird magic that involves Ahmanet who has since escaped from her sarcophagus and has set her eyes on world domination.

It’s been described as reboot of The Mummy franchise but don’t go in thinking this is a remake of the 1999 original with Brendan Fraser.  With the exception of the title, there aren’t a lot of similarities.  This is part of a new “Dark Monsters” universe that is trying to compete with big action franchises already established by Marvel and DC Comics.  Characters getting their own films over the coming years include Frankenstein, The Invisible Man, The Creature from the Black Lagoon, Van Helsing and Dracula.

There’s already an overlap here with Russell Crowe making an appearance as Henry Jekyll – a doctor who jokes about studying infectious diseases but is more interested in a world of “gods and monsters”.  He’s an interesting character whose motives are unclear.  Nick and Jenny must stop Amunet before it’s too late but they’re not sure if Jekyll wants to help or hinder.

Alex Kurtzman has made a name for himself as an action writer (The Legend of Zorro, Transformers, Star Trek) but this the first time he’s been given the director’s reins for a $125 million big screen blockbuster.  The style and spirit reminded me of the Nicolas Cage National Treasure franchise.  It’s trying to be a fun, light-hearted adventure where characters slowly put the puzzle pieces together to solve a mystery.  It’s not intended to be too heavy or too serious.

Tom Cruise gets his fair share of worthy one-liners and impresses with a series of elaborate stunts.  He’s incredibly agile for someone who is 54 years of age.  The sound and visual effects artists have also earned their salaries by creating a creepy Mummy with a distinctive voice.  The screenplay isn’t as strong.  Nick and Jenny fall in love and while it’s expected, it’s still hard to buy into given the way they met and their very limited interaction before the “fireworks” commence.

Bride of Frankenstein is the next in the series which we’ll be seeing in February 2019.

You can read my interview with director Alex Kurtzman by clicking here.