Review: War for the Planet of the Apes 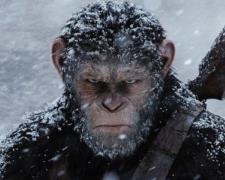 I’ve been impressed by the way in which this rebooted franchise has evolved.  Writer-director Matt Reeves has created three distinctly different films that are very different from the original series that was released between 1968 and 1973.

Rise of the Planet of the Apes (2011) focused on the humans.  A group of scientists had created a drug which could be used as a possible cure for Alzheimer’s disease.  It was tested on chimpanzees who developed human-like intelligence.  Dawn of the Planet of the Apes (2014) was set 10 years in the future and focused on both the humans and the apes.  After a man-made virus had wiped out a big percentage of the human population, a battle raged to see who would be the planet’s dominant species.

War for the Planet of the Apes continues the shift in perspective and is told solely from the viewpoint of the apes.  It’s set further into the future where the apes, led by the much-loved Caesar (Serkis), have created a hideaway in a secluded forest.  They wish to live a peaceful existence and have nothing more to do with the human race.

Unfortunately, some of the humans feel otherwise.  Woody Harrelson plays the leader of a rogue military group that wants to capture the apes and use them for his own villainous purposes.  He has other motives too and these become clear later in the film.  Caesar would rather steer clear.  He knows he should take the other apes and flee to safer ground.  Deep down though, he is tired of running and wants revenge against the humans who have killed his family.

Part of this film’s allure is the way it makes you feel sympathetic towards the apes and their plight.  They’re the ones with traits such as warmth and forgiveness.  It’s the humans who come across as “animals” in that they are selfish creatures with no respect for others or their planet.  I’d have preferred more depth to the human side (all we see is the crazy Harrelson) but can understand Reeves bold move in going with the ape perspective.

The script plays its part but another reason audiences will care so passionately for Caesar and the other apes is because of the incredible work of the special effects artists.  Motion capture has been used once again to create apes that look as real as anything else you’ll see on screen.  This is particularly evident when you see the hair, scratches and blemishes during facial close-ups.  It’s a shoe-in for Oscar nomination in the visual effects category.

Culminating with a tense action-packed finale in a snow-covered landscape, War for the Planet of the Apes is a fitting end to a worthy trilogy.