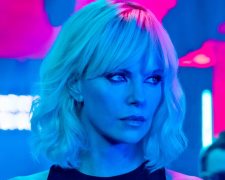 November 1989 would have been a great time to visit Berlin.  After decades of separation, the Berlin Wall came crashing down and a further step was taken towards the unification of East Germany and West Germany.  I was only 12 years old at the time but I can remember watching news footage at the time and realising it was an historical event.

Atomic Blonde is set in Berlin at precisely the same time.  It’s a curious decision from writer Kurt Johnstad given that the film isn’t about the fall of the wall itself.  Rather, it’s a completely fictional spy thriller that as a James Bond-like feel.  The individual who is front and centre to all the action is Lorraine Broughton (Theron), an MI6 agent who has been sent to West Germany to recover a watch that has been stolen from a deceased agent.  Inside the watch is a list of undercover agents that, if it were to fall into the wrong hands, could be hugely damaging to MI6 and the CIA.

The film is structured as a “who’s playing who?” kind of story.  There isn’t a single character that comes across as honest and well-intentioned.  James McAvoy is a fellow agent based in Berlin who has his own agenda.  Sofia Boutella is a French agent who keeps her cards close to her chest.  Eddie Marsan is a Soviet defector looking to exchange information for protection.  John Goodman and Toby Jones are two senior agents working out of London who are trying to take charge of the situation.

The best parts of Atomic Blonde are the fighting sequences.  Lorraine is attacked repeatedly and she uses every trick in the book to stay alive.  It’s one of those movies in that instead of just killing her enemies with a gun, she gets caught up in lengthy battles that involve punching, kicking, battering and strangling (because a simple bullet is too boring).  Director David Leitch is a former stuntman and was an uncredited co-director on the original John Wick.  He has a good eye behind the camera and knows how to create an exciting action scene.

It’s the story which doesn’t enthuse to the same extent.  The characters keep yammering on about the secret list and the dangers of not recovering it.  They’re the two main attractions but the conversations between Charlize Theron and James McAvoy lack spark.  All they seem to do is express their mistrust for the other in a repetitive, not-so-interesting manner.

Lietch has thrown in a 1980s soundtrack which older audiences should appreciate.  I never thought I’d ever hear the song “I Ran” from A Flock of Seagulls used successfully in a movie but it’s now happened twice in a year following on from the Oscar-nominated La La Land.  Other artists to feature here include David Bowie, Queen, George Michael, Duran Duran and The Cure.

It’s great to see a female-led action film but Atomic Blonde is a few notches below John Wick.