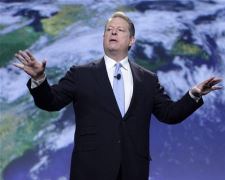 Released back in 2006, An Inconvenient Truth tried to raise awareness about global warming and its possible effects.  It was well received.  Along with numerous other awards, it took home Oscars for best documentary feature and best original song (the Melissa Etheridge tune ‘I Need to Wake Up’).

A decade has since passed but in the eyes of many, progress on climate change has been disappointing and it’s become a political issue.  On the Internet Movie Database, the public can weigh in with their thoughts on each film and give a rating between 1 and 10.  For this sequel, 40% gave it a score of 10/10 whilst 42% gave it a score of 1/10.  That division highlights just how passionate some people are their views.

For the record, I believe in the work performed by the overwhelming majority of scientists and that climate change is real.  We need to do whatever is necessary to stop global warming before it is too late.  That said, I’m still happy to look at this film objectively and review it on its merits.

Director Davis Guggenheim wasn’t available this time around and so he handed over the reins to Bonni Cohen and Jon Shenk.  Their film doesn’t delve into too much scientific detail but rather, tries to prove global warming in a visual form.  It refers back to prophecies made by former U.S. Vice President Al Gore in the first movie which leads into footage of Hurricane Katrina and Hurricane Sandy and the destruction that was caused.  We also travel to the world’s biggest glaciers and witness their deterioration over time.

The film’s biggest focus is the lead up to the 2015 United Nations Climate Change Conference which took place in Paris.  After a lengthy period of negotiation, many world leaders agreed on the “Paris Agreement” – a document that set greenhouse gas emissions targets that would hopefully lead to meaningful change.  The cameras follow Al Gore and his team as they meet with influential people in the lead up to conference.  Trying to get close to 200 countries to agree on a single issue is not an easy assignment.

The timing of this sequel is appropriate given that global warming is back in the political spotlight.  Research showed that the original movie did change the views of many around the world.  Cohen, Shenk and Gore will be hoping that’s again the case here.  With President Donald Trump announcing two months ago that the United States will be withdrawing from the Paris Agreement, this is a subject that will be soaking up plenty of media time in the weeks and months ahead.

An Inconvenient Sequel: Truth to Power makes some important observations but its power isn’t as strong as the original.  Perhaps that’s because I’m already on the side of Al Gore and he’s simply “preaching to the converted”.  Perhaps it’s because this issue now gets far more attention than it did 10 years ago which makes this documentary slightly superfluous.  Perhaps it’s because there’s not as much material to cover this time around and the weighting given to the Paris conference is too much.

Qualms aside, does this film need to be seen by as many people as possible?  The answer is a clear “yes”.