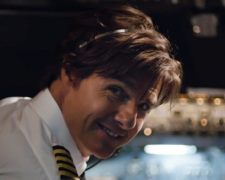 Why go to the effort of creating fiction when you can use a true story as crazy as this?  Brought to the screen by writer Gary Spinelli and director Doug Liman (The Bourne Identity), American Made is based on the life of Barry Seal.  His tale is a reminiscent of George Jung, the drug dealing kingpin whose misadventures were chronicled in Ted Demme’s Blow (released back in 2001).

We’re introduced to Barry (Cruise) while he’s sitting in the cockpit of a jumbo jet.  The year is 1978 and he’s the youngest pilot to have ever been employed by the airline TWA.  You could make an argument that he suffers from an attention deficit disorder.  His mind is continually wandering and he has an obsession with keeping busy.

After a long haul flight, Barry is pulled aside in a hotel bar by CIA agent Monty Schafer (Gleeson).  He knows that Barry has been sneaking in boxes of illegal Cuban cigars aboard his flights but he’s not there to make any arrest.  Rather, he wants to recruit him.  It’s important to note this was at the height of the Cold War when the Soviets were doing their best to spread communism in South America.  Monty wanted Barry to fly across Colombia in a twin propeller plane, under the guise that he runs his own small airline, and take reconnaissance photos which could be used by the CIA.

That’s where it starts… but it’s certainly not where it ends.  Barry befriends the likes of Pablo Escobar and it is not long before he’s smuggling huge drug shipments into the United States.  The CIA learns of this but doesn’t seem to care.  In fact, they encourage the sale of drugs and arms because it’s putting money into the hands of powerful cartels that will hopefully overthrow the communist governments of these countries – a goal in America’s best interests.

It’s a role suited to Tom Cruise who portrays the lead character as a likeable larrikin who lacks intelligence but makes up for it with charm and personality.  He’s bumbling his way between events but it’s hard not to laugh at his antics.  There are a couple of great scenes where he tries to hide ridiculous sums of cash but has run out of decent hiding places.  He resides in a small town of about 3,000 people but it’s not long before every major bank is opening up a branch on the main street.  They know Barry by reputation and are keen to assist with his wealth protection.

There are other characters in the mix but we don’t get to know them in acute detail.  Sarah Wright plays Barry’s wife and she blindly goes along with his activities without thinking of the ramifications.  Domhnall Gleeson plays the overeager CIA agent who doesn’t seem to be accountable to anyone despite the risky nature of his work.  There are also cameos from the likes of Jesse Plemons as the town’s naive sheriff and Jayma Mays as the state’s aggressive Attorney General.

After an intriguing set-up, things get a little repetitive during the second act as Barry’s accumulates his wealth.  You know his illegal lifestyle can’t last and you’ll be anxious to see how it all pans out.  Spinelli’s screenplay provides a curious finale that introduces darker elements while still maintaining the film’s light, humorous tone.  I’m not 100% convinced by the approach but the story alone makes this worthwhile viewing.