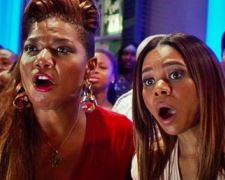 We’re two-thirds of the way through 2017 and if you look at the box-office figures from the United States, the two highest grossing films have been Beauty and the Beast ($504m) and Wonder Woman ($405m).  What’s interesting is that both films have women in the leading role.  It reminds me of Cate Blanchett’s famous line at the Oscars when she spoke about female-driven films – “Audiences want to see them and, in fact, they earn money. The world is round, people!”  She’s dead right.

Another film to make an impact in the U.S. this year has been Girls Trip.  If you exclude light-hearted action films, it is the highest grossing live action comedy of the year with a take of over $106m.  In a similar vein to the Oscar nominated Hidden Figures, it demonstrates that there is a huge appetite for movies about African American women.  I suspect we’re going to see a lot more of them (rightly so) in future years.

As for the premise, four middle aged ladies get together for a fun, boozy weekend at a music festival in New Orleans.  They’ve all been great friends since high school but given they now have such busy, disparate lives, it’s become harder and harder to catch up.  This is the first time they’ve all got together in 5 years.

Ryan (Hall) is a successful author who has gained notoriety and financial success through her self-help book “You Can Have It All”.  She’s hoping to close a business deal in New Orleans that will culminate with her own television show.  Sasha (Latifah) is at the other end of the financial spectrum.  Despite starting out as a legitimate journalist, she now runs a tacky gossip website and is struggling to pay the bills.

Lisa (Smith) is a single mum who is in desperate need of a holiday.  She works long hours as a nurse and spends the rest of her life caring for her child and stressing over insignificant things.  The last member in the quartet is the most outrageous.  Dina (Haddish) never left her college days behind and is still a party machine.  Her goals for the trip are to drink copious amounts of alcohol and get laid as many times as possible.

The broader screenplay is formulaic.  You can foresee certain events well before they happen.  That isn’t to say you can’t have fun watching this.  Girls Trip is a raunchy, hilarious comedy with some great individual scenes.  There’s a moment where Jada Pinkett Smith finds a unique way to go to the bathroom.  There’s another where Tiffany Haddish finds an unorthodox use for a giant grapefruit.  It’s best to avoid the trailers as they do give too much away.

It’s the strength of the characters that provides the film with its biggest asset.  These are four very different women but they all have great personalities and they all have a chance to shine throughout the film.  Their conversations are filthy but that was part of the attraction for director Malcolm D. Lee (The Best Man, Soul Men).  He sees these joyful characters as more representative of the African American community than what is often depicted on screen and television.

We saw a similar collective of party-loving women in the Scarlett Johansson-led Rough Night a few months ago.  That film had its moments but Girls Trip takes it up a few notches.  It provides more laughs, more surprises and more entertainment.