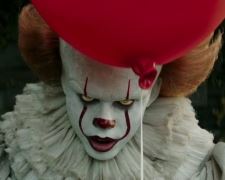 Author Stephen King is the flavour of the month here in Australia with two adaptations released in cinemas within the space of three weeks.  The Dark Tower struggled at the box-office and didn’t get much love from critics.  Expectations will be higher for It given it’s a novel that has been successfully adapted before.  A two-part series first aired in the United States in November 1990 and I can remember watching it when it found its way into Australian video stories not long after.

The film opens with arguably it’s most shocking scene.  A young boy named Georgie sees his paper boat washed down a drain while playing out on the street during a heavy storm.  When he peers down into the drain, a freaky looking clown is staring straight back at him.  There’s a little bit of small talk but eventually, the clown grabs Georgie’s arm, rips it off, and then pulls him down into the sewer.  A lady looks on from her front porch and sees a mix of blood and rainwater in the middle of the street.

Instead of focusing on the funeral and resulting investigation, the narrative jumps a few months forward to a somewhat happier time.  A group of young kids have finished up school for the year and are planning on a series of adventures over the summer holidays.  It’s a reminiscent of the popular television series Stranger Things given the age of the cast, the supernatural themes and the 1980s setting.  The fact actor Finn Wolfhard appears in both It and Stranger Things only adds to the sense of familiarity.

King’s novel is 1,138 pages in length and while this film excludes a major part of the story (for reasons that you’ll learn at the end), it’s a struggle to develop these characters in the level of detail required.  It’d be better suited for a multi-part television series.

There are seven kids in total that form the “Losers Club” and the screenwriting team struggles in working out how much time to devote to each.  There’s a strong inference that one of them has been sexually abused we rush through these scenes so as to keep the focus on the scary clown.  The weakest characters are a group of one-dimensional bullies who are jerks for no reason in particular.

With the parents and authorities pushed deep into the background (except for a handful of scenes), it falls upon the heroic children to confront the clown, who goes by the name of Pennywise (Bill Skarsgård) and find out what happened to Georgie.  It’s clear from the outset that something is unusual about the town.  The number of people who disappear is 6 times greater than the national average and there’s a 7pm curfew which is enforced each night.

The performances delivered by the young actors aren’t particularly convincing.  The dialogue doesn’t flow and their emotions are overcooked.  The screenplay tries to create tension between some of them but these arguments are trivial and end up being resolved far too easily (tying back to my qualms about a rushed premise).

As Pennywise the clown, Bill Skarsgård (Atomic Blonde) is creepy but he’s a few notches below Tim Curry’s sensational performance in the 1990 mini-series.  Curry freaked audiences out with his voice and facial expressions.  Skarsgård has less to say with director Andy Muschietti (Mama) relying more on make-up and visual effects.  It’s not as effective.

I’ll have no trouble sleeping tonight… and that’s actually a shame.