Review: The Mountain Between Us 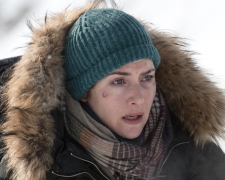 A small charter plane crashes on top of a snow-covered mountain in a remote part of the United States.  The pilot is killed and the two passengers survive, albeit with a few injuries.  Joined by a dog who was also aboard the plane, this unlikely duo go on a lengthy trek through freezing conditions to find help before it is too late.

It’s a worthy premise.  However, how we get to that point is a little cheesy.  Ben (Elba) and Alex (Winslet) are two strangers who meet by chance at an airport in Idaho en route to Denver.  Every plane has been cancelled due to bad weather and this has thrown their plans into disarray.  Ben is a renowned doctor who must get home to perform critical surgery on a patient.  Alex is equally desperate since her wedding is scheduled for the next day.

With all hire cars taken, they go with an unorthodox option and approach Walter (Bridges), the owner of a small 4-seater plane.  He isn’t too fussed about the inclement weather (not sure why) and decides not to lodge a flight plan (not sure why either).  I should also add that Ben and Alex haven’t told any family members of the plans either (not sure why again).

All of these points are relevant for when Murphy’s Law kicks in.  The plane goes down and whilst Ben and Alex survive, there’s almost no point in waiting to be rescued because no one knows where they are.  They will need to harness every ounce of energy, climb down the mountain, and return to civilisation.  All of this takes place in the second act which is the most interesting part of Hany Abu-Assad’s film.  Whilst our two heroes are sharp, intelligent people, they don’t always agree on strategy.  The stress of the situation and the increasingly likelihood that they won’t survive starts to take its toll.

The film is ruined by a farcical finale that resembles something from a Nicholas Sparks novel.  Despite the fact that Alex is engaged and Ben is an emotional vacuum, the two fall in love.  I want to say a more but I need to be careful in terms of spoilers.  You’ll know what I mean once you’ve seen the movie.  It runs 10-15 minutes longer than it should and the final scene (just before the quick fade to black) exemplifies the clichéd nature of the material.  I guess screenwriter Chris Weitz (About a Boy) had limited options in trying to stay true to the novel penned by Charles Martin.

Idris Elba and Kate Winslet are both terrific actors but their skills are not enough to save this sappy mess.