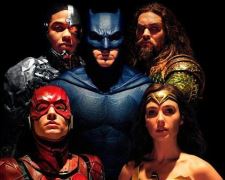 Marvel did it with The Avengers and now DC Comics is trying to do the same with Justice League.  You get the sense there’s a little impatience though.  Marvel gave each of its characters a standalone movie across a three year stretch before bringing them all together for the first Avengers movie.  That’s not the case in the DC Universe.  Three heroes in Justice League (The Flash, Aquaman and Cyborg) are being seen for the first time.

It’s for this reason that the opening hour is spent introducing the characters and bringing them together.  Some we’re already familiar with.  Batman (Affleck) is a brooding, emotionless man who jokes that his superpower is “being rich”.  After slaying a bug-like creature, he gets a strong sense that dark times are coming to Earth and that he’ll need a little help to defeat the next villain.  For this reason, he enlists the precocious Wonder Woman (Gadot).  She prefers to keep a low profile but realises that her services will be required.

The new additions all have something different to offer.  The Flash (Miller) can move at breakneck speed and generate an electric charge in the process.  Aquaman (Momoa) can control the movement of water whilst also communicating with creatures that live under the sea.  Cyborg (Fisher) is a human-turned-robot who has incredible power thanks to his metal arms and legs.

There’s just the one “bad guy” for them to stop – a ho-hum alien named Steppenwolf.  He’s come to Earth to locate three power boxes which, if brought together, will allow him to transform the planet into his own version of hell.  He’s not a particularly creative or engaging villain and he’s easily the weakest part of the movie.  That’s even more obvious when you compare him to Cate Blanchett, Jeff Goldblum or Tom Hiddleston in the recent Thor: Ragnarok (a vastly better film).

The action scenes feature so much colour and so much CGI that you’d question whether actors were even needed.  They did nothing to get my blood pumping.  It’s just a repetitive, goofy smash-a-thon that lacks the character development that made Wonder Woman so great (also a vastly better film).

The most interesting battle is to see which character has the funniest one-liners and it’s Ezra Miller who comes out on top as The Flash.  His light-hearted, insecure nature reminded me of Tom Holland in Spider-Man: Homecoming (you guessed it – a vastly better film).  The other characters are trying to outsmart each other in the comedy stakes but they’re too hard.

The budget of Justice League was reportedly $300 million and if you ask me, that money was not well spent.