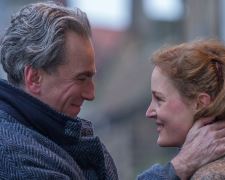 Before we get to the content of the film itself, Phantom Thread has made its fair share of news in Hollywood.  In June last year, Daniel Day-Lewis released a statement saying that he “will no longer be working as an actor” and that “neither he nor his representatives will make any further comment on the subject.”  Despite being just 60 years of age and the only male in history to win 3 Oscars for best leading actor, he had made the decision to retire.  Phantom Thread would be our last chance to see him on screen.

The film also generated fresh publicity when the Academy Award nominations were announced last Tuesday.  Despite being overlooked by most Oscar pundits and predictors, it surprised many when it picked up a slew of nominations including best picture, best director, best actor and best supporting actress.  It’s worth noting that only 3 movies received more nominations – The Shape of Water, Dunkirk and Three Billbords Outside Ebbing, Missouri.  It’s clear that members of the Academy like this film.

I’m not sure all members of the public will feel that way.  Despite my adoration of the movie and director Paul Thomas Anderson (Boogie Nights, Magnolia), this is an unconventional romantic drama that doesn’t play out in a way you will expect.  The film is set in 1950s London and largely revolves around just three characters.

Reynolds Woodcock (Day-Lewis) is an acclaimed fashion designer and “confirmed bachelor”.  It seems every woman wants to wear his beautiful dresses whether they are members of the royal family or high-profile socialites.  Cyril Woodcock (Manville) is his hard working sister who acts as both his business manager and personal assistant.  She takes care of all the awkward, messy stuff so as not to disrupt her brother’s creative freedom.  Alma Elson (Krieps) is the newest arrival in the household and the latest in Reynolds’ revolving turnstile of girlfriends.  Unlike others, she isn’t afraid to stand up to Reynolds and she becomes a trusted, valuable muse.

Phantom Thread is an engrossing character study as we watch all three individuals try to gain the upper hand in his curious household.  The power changes throughout and you’re never quite sure how it will all end up.  I don’t know his secret but Paul Thomas Anderson has a knack for bringing out the best in any actor.  He’s done that again here by working with Day-Lewis for the second time (after There Will Be Blood) and newcomers to the Anderson fold, Lesley Manville (Another Year) and Vicky Krieps (A Most Wanted Man).

I’m being cryptic regarding the narrative as it’s the kind of movie where the less you know going in, the better.  Reynolds is such a fascinating person.  He comes across as so calm but also so intimidating.  You never know what he’s thinking which is quite scary.  It’s hard to pick a highlight but there are some great scenes shared around the breakfast table that illustrate the power struggle whilst also providing a few laughs when it comes to “breakfast etiquette”.

With plenty to digest upon leaving the theatre, Phantom Thread is another feather in the cap for Paul Thomas Anderson.