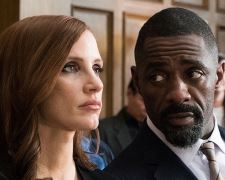 There are many ways to find fame and fortune in Hollywood but the path of Molly Bloom (Chastain) was not one that had been taken before.  We get a snapshot of her upbringing during the film’s introduction.  She lived in the shadow of her other siblings, she was pushed hard by her overbearing father (Costner), and she almost forged a career as a moguls skier.  She was within reach of a spot on the United States team for the 2002 Winter Olympics until a sickening injury during qualifying put paid to those plans.

She subsequently moved to Los Angeles and tried to find work so she could save up to attend law school.  It was there she met Dean Keith (Strong), a bossy real estate manager in need of an assistant.  It’s worth noting that whilst this story is based on actual events, the names of many characters have been changed.  Molly did this in her book to protect their identity, ensure they avoided criminal prosecution, and, perhaps most importantly, to ensure she was safe from any reprisal.  That said, the real identity of some fictional characters can be learned through a simple internet search.

Anyway, back to the story.  Dean organised underground poker players with rich, influential people in Los Angeles and he enlisted Molly to help out.  She’d help recruit players whilst also taking care of details during the games such as accounting for poker chips and providing drinks.  It wasn’t long before she was pulling in sizeable tips from the players.  Law school would have to wait because this form of income was far too lucrative to give up.

Sensing that Dean was annoyed about her increasing power, Molly made an important move.  She severed their working relationship and started up her own independent poker games.  The players soon followed.  They were impressed with the way she operated and her reputation was top notch.  It wasn’t long before she was running games with buy-ins as high as $50,000 per person.

Things didn’t go quite so well after that but I’ll save most of those details so as not to spoil the bulk of the story.  There are two timelines at play throughout much of the film.  All of what I’ve mentioned thus far is set in the past and told by way of flashback.  The current narrative sees Molly working with a reputable lawyer (Elba) to defend herself against a criminal case brought against her after being arrested by the FBI.

Molly’s Game marks the directorial debut of Academy Award winning writer Aaron Sorkin (The Social Network, Moneyball).  In a similar vein to his previous writing credits, it’s a dialogue driven piece where things are explained neatly and precisely.  Sorkin deserves credit but it’s Jessica Chastain who is the film’s strongest attribute.  She gives a terrific performance in portraying Molly as both a strong-willed but also flawed individual.

I’d argue the film is too heavy handed with its use of narration.  There are parts where it feels like Molly is telling me stuff I could read directly from her book but I get a sense it was done this way to keep the story moving and avoid unnecessary scenes.  It’s also a little too preachy in places.  There’s a scene late in the movie involving Molly’s father that comes completely out of left field and it’s too obvious in what it is trying to achieve.

Picking up a nomination at the upcoming Academy Awards for best adapted screenplay, Molly’s Game is an interesting tale.  You certainly don’t have to be a poker fan to enjoy it.