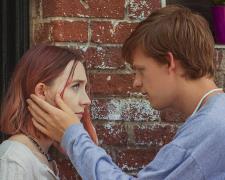 Awards season is always filled with terrific movies but this year’s group is particularly good.  We’ve been treated to The Florida Project, Call Me by Your Name, Coco, Three Billboards, The Post and The Shape of Water.  The last of this year’s Oscar nominees for best picture to make its way into Australian cinemas is Lady Bird, the creation of writer-director Greta Gerwig.  Gerwig is better known for starring in quirky comedies such as Greenberg, Damsels in Distress and Frances Ha but with Lady Bird, she shows that she’s just as talented behind the camera as she is in front of it.

The film takes us inside the world of Christine McPherson (Ronan) – a restless high school senior from Sacramento who isn’t sure what she wants out of life.  Set 15 years ago, she laments that “the only exciting thing about 2002 is that it’s a palindrome.”  She doesn’t have a lot of friends at school, she hasn’t been able to land a boyfriend, and she has a rocky relationship with her interfering mother, Marion (Metcalf).

What is clear is that Christine longs to escape her family roots and get the hell out of Sacramento.  The first way she demonstrates this is by changing her first name to “Lady Bird”, much to the displeasure of her mother.  Secondly, she enrols in a bunch of out-of-state colleges with the hope she’ll be accepted.  That won’t be easy given her school results are sub-optimal.

There are a number of storylines that generate both humour and drama.  Lady Bird finds love for the first time by winning the affections of a quiet, conservative boy (Hedges).  She ditches her loyal, long-time best friend so that she can try to strike up a new friendship with a superficial, uber-popular girl.  She runs afoul of the nuns who run the Catholic school by instigating a series of pranks and rebellious deeds.  Whilst they’re impeccably acted, these subplots aren’t offering anything we haven’t seen in previous teen-orientated flicks.

What separates Lady Bird from the pack is the funny, heartfelt way in delves into the relationship between mother and daughter.  Both women are strong willed and don’t yield easily when they have a differing point of view (which tends to be all the time).  Marion thinks she knows best as the elder statesman who appreciates how ruthless and tough the world can be.  She wants to impart that view on her daughter.  On the flip side, Lady Bird is frustrated by her mother’s negative, cynical attitude and lack of optimism.  It’s a big reason why she wants to enrol at a college across the other side of the country.

The tension between these two characters is the heart of the movie.  It’s also the reason why the brilliant Saoirse Ronan (Brooklyn) and Laurie Metcalf (Roseanne) have been nominated for Academy Awards.  Both make mistakes and both say unnecessarily mean things but that’s part of life.  There’s a great scene where they argue in a clothes store and then act like “best friends” moments later.  No matter how much they try to push each other away, there’s an unspoken bond that draws them back.

With sharp, insightful dialogue and some great individual scenes (such as when Lady Bird visits a convenience store after turning 18), Greta Gerwig deserves all the credit she’s been receiving for this “coming of age” gem.