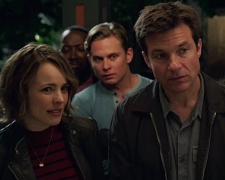 I work with a bunch of people who get to the movies once every month or so but wouldn’t consider themselves film buffs.  Talking to them about the premise of Game Night (which they hadn’t heard of before), there was certainly a heightened level of intrigue.  Even I have to admit that it sounds like a cool idea for a movie on paper.

Written by Mark Perez (The Country Bears, Herbie Fully Loaded), we begin with a cute introduction as to how the film’s two key protagonists first me.  Max (Bateman) and Annie (McAdams) were on opposing teams at a pub trivia night but they quickly realised they had something in common – a mutual attraction and an intensely competitive nature.  Such is their love for games, Max actually popped the question during a game a charades.  I’d have expected nothing less from these two.

Things are generally going well for Max but there’s one sore point that’s making him anxious – his brother.  Brooks (Chandler) is a successful venture capitalist who lives in nice houses, travels around the world, and drives expensive cars.  Their levels of success are summed up best when Brooks is described as Mark Wahlberg and the underappreciated Max is described as Donnie Wahlberg.  It’s clear that max is tired of living in his brother’s shadow.

Agreeing to host a game night for the first time, Brooks once again tries to show off in front of Max, Annie and four of their good friends.  Rather than organise a simple game of Monopoly, Scrabble or Cluedo, he goes all out and orchestrates a fictitious crime.  He says that someone at the game night will be kidnapped and it’ll be up to everyone else to put together the clues and solve the mystery.  A substantial prize awaits the winner.

If you’ve seen the trailer or any adverts, you’ll know what happens next.  An actual crime is committed but the problem is that the participants at the game night are none the wiser.  They see Brooks being gagged and carried away by two hired goons without having any idea that it’s actually real.  What follows is a series of humorous, chaotic events as the game night participants try to locate Brooks without realising just how dangerous the situation is.

Leave your brain at the door with this one.  The more you think about it, the less sense it makes.... but that’s not to say that you can’t have fun watching it.  The story doesn’t flow particularly well but there are some great individual scenes that make it worth the price of admission.  A great example is a sequence where Max and Annie argue outside a convenience store while she tries to extract a bullet from his arm using a craft knife, a bottle of chardonnay, and instructions from Google.  It’s farcical but it’s funny.

The bickering between the characters also wins humour points.  Kevin (Morris) and Michelle (Bunbury) are two game night participants who lose focus after she admits she slept with a Hollywood celebrity several years ago (but won’t reveal who it is).  Ryan (Magnussen) is a not-so-bright friend who has brought along a first date (Horgan) for unknown reasons.  He gets limited screen time but Jesse Plemons is the MVP of the cast with his portrayal as a creepy, game-loving next-door neighbour with zero friends.

With some of the best jokes requiring a long set up (e.g. the scenes with Danny Huston), Game Night is fun, silly and trashy.  Make sure you stay until the very end of the credits for one final joke.