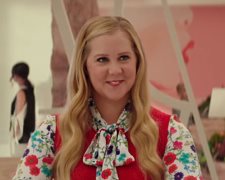 Every few years, we get one of those movies where characters switch bodies and gain a wider, more informed appreciation of the world.  Examples include Freaky Friday, The Change-Up, The Hot Chick, Dating the Enemy and Vice Versa.  Written and directed by Abby Kohn and Marc Silverstein, I Feel Pretty taps into that same genre with one added twist – it’s a perceived change as opposed to an actual one.

As we’re introduced to Renee (Schumer), we see her as an insecure, self-conscious woman who can’t catch a break.  That’s best illustrated in an over-exaggerated opening scene.  Renee harnesses the confidence to visit a gym and enrol in a cycling class.  It’s only been going for a matter of seconds before the bike seat breaks and her pants split open.  She’s bolts for the exit, quick to avoid the gaze of her fellow gym-goers, but the embarrassment doesn’t end there given she has to walk home while covering her exposed crotch.

Ever seen the 1988 comedy Big with Tom Hanks?  There’s a moment where a 12-year-old makes a wish at a spooky fortune telling machine and then wakes up the next day as a grown man.  I’m not trying to provide another example of a body switch movie.  Rather, I’m referring to a creative overlap between it and I Feel Pretty.  There’s a sequence where Renee is watching Big on TV and she’s inspired to throw a coin into a fountain and make a wish of her own – to look incredibly beautiful.

Lo and behold, the wish comes true… well, kind of.  Renee knocks her head and upon regaining consciousness, she glances into a mirror and sees a thin, dazzling woman looking straight back.  Her friends and work colleagues realise she looks exactly the same but no one is prepared to rain on her parade.  They go along with the charade because Renee is as happy as she’s been in a long time.

This could have been fun, original comedy but it ends up being too safe and predictable.  It’s the kind of movie where the audience will be a few steps ahead of the narrative as opposed to the other way around.  Renee develops enormous self-confidence from her supposed transformation and this allows her to find a guy and land her dream job as the receptionist for a renowned cosmetics company (you’d think she’d aim higher).  It’s not long before Renee’s confidence transforms into arrogance and she becomes one of those people she’s always despised.

The film’s theme of “beauty lying within” is drummed home continually.  Other parts of the storyline give off a mixed vibe.  Renee is brought into the inner circle of the cosmetics company where she interacts with the sweet CEO (Williams) and her friendly mother (Hutton) as they try to introduce a low-cost product line for the “average woman”.  It may sound wonderfully positive and inclusive but it’s hard to take the company seriously given Renee is the only person in the building who doesn’t look like an uber-thin supermodel with flawless skin.

Amy Schumer earns a few genuine laughs with her over-the-top performance but as the film isn’t telling us anything new or offering any unexpected surprises, you’re unlikely to go through a transformation of your own upon leaving the cinema.