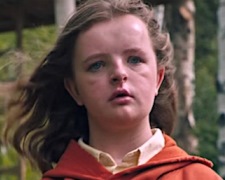 If you’ve seen the trailer or any other advertisements, you’d think Hereditary was a jump-out-your-seat horror film from start to finish.  That’s not the case during the opening hour.  It’s a dark, heavy drama about a family keeping secrets and dealing with grief.  It’s the sort of tale that would generate Oscar talk if released later in the year.

Annie Graham (Collette) is a renowned artist coming to grips the death of her elderly mother.  There’s a sense of loss but also a sense of relief.  Her mother was a private person from a “polluted” life who suffered from dementia in her later years.  The person struggling most with the situation is Annie’s social awkward 13-year-old daughter, Charlie (Shapiro), who was very close with her grandmother and relied upon her friendship.

There are two members of the Graham household who also have a part to play.  The first is Annie’s teenage son, Peter (Wolff), who must confront a tragic situation of his own.  There’s a powerful scene around a dinner table where the tension between he and his mother finally comes to the fore.  The final family member is Steve (Byrne), the quiet husband trying to offer emotional support whilst also being the “voice of reason” when arguments overheat.

Written and directed by first timer Ari Aster, Hereditary doesn’t let the audience off easily.  It’s a film designed to have maximum impact.  The best example is a lengthy sequence involving a car accident which is viewed from the perspective of a single character from start to finish.  Lacking in sound and lacking it music, it’s tough to stomach.  We’re just looking into the eyes of someone, soaking it in and wondering what is to follow.

As anticipated, the film delves into its supernatural elements during the second hour.  Again, it’s hard to say too much without revealing spoilers but Aster deals with them in a fresh, reinvigorated away.  He’s hasn’t relied on old formulas to create cheap scares.  We’ve grown to care about these characters and so we’re fully invested in their fate.  There’s plenty to ponder as the credits start to roll.

It’s not a big cast but the performances are all worthy of the material.  This is the best we’ve seen from Toni Collette (Muriel’s Wedding) since her award-winning run on the United States of Tara.  You can sense Annie’s intelligence but also the struggle to keep her emotions in check as things start to unravel.  He isn’t required to say much but Alex Wolff (Jumanji: Welcome to the Jungle) also deserves praise for his intense performance as the scarred Peter.