Review: Sicario: Day of the Soldado 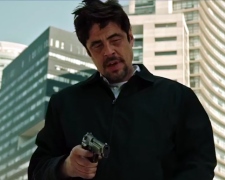 How much faith do you have in the government, the military, and the intelligence divisions that they oversee?  Do you think they should rely on firm, well established processes that protect human rights and require the law to be obeyed at all times?  Or should we rely on the judgement of the people and allow them to act outside of the law if they believe it can produce a better outcome?

If that question was asked of the fictional Secretary of Defence James Riley (Modine) in Sicario: Day of the Soldado, he would selection answer #2.  A terrorist attack has occurred in Kansas City with a group of suicide bombers targeting a grocery store and killing 15 people.  The public are desperate for more information.  They want to know the identity of the killers, their motives, and what the U.S. Government is doing to ensure justice is served.  With traditional forms of detective work coming up empty, Riley proclaims that “dirty is what we need”.

Suspecting that a Mexican cartel may have helped the terrorists enter the country, the U.S. Government decides to ruffle feathers with a secret, illegal operation.  They call upon the services of Matt Graver (Brolin) and ask him to kick start a war between cartels in Mexico to help flush out key targets and put a dent in their resources.  Assisted by old friend Alejandro Gillick (del Toro), Graver gets the job done by kidnapping the 16-year-old daughter of a cartel leader (Moner) and laying a trail that points to a rival cartel.  The drones, the helicopters and the weaponry are all funded “under the counter” by a mysterious government branch.

It’s not as strong as its 2015 predecessor but Sicario: Day of the Soldado still features some great pieces that will leave you on the edge of your seat.  These characters have an array of technology at their disposal and it’s both enthralling and scary to see their plans executed with such precision.  The best example is the kidnapping sequence where almost nothing is left to chance.

Most action-thrillers are often a battle of good versus evil but this film bucks that trend and could be described as evil versus evil.  It’s hard to work out who to cheer for.  While these characters show fleeing glimpses of a softer side, their motives are largely selfish with wealth, power and revenge at the forefront of their minds.  The film also touches on two divisive subjects in the United States right now – drug control and immigration.

Benecio del Toro and Josh Brolin have reprised their roles from the original with both delivering gritty performances.  Oscar nominated screenwriter Taylor Sheridan (Hell or High Water) made the decision not to bring back Emily Blunt because “her arc was complete”.  It’s a shame as she was the most interesting character from the first movie – a woman forced to question her morals when realising those around her share different ideals.  Such an individual is lacking in Sicario: Day of the Soldado but it’s one of the few weaknesses of a strong production.