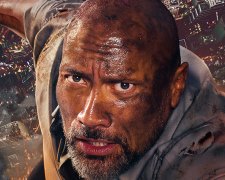 It’s a topic that’s up for debate but if you’re looking for my opinion, the most “bankable” actor in Hollywood right now is Dwayne Johnson.  In addition to the hugely successful Fast and the Furious franchise, he has starred in a number of action flicks over the past 6 years that have cracked the $300 million mark at the worldwide box-office – Journey 2: The Mysterious Island, G.I. Joe: Retaliation, San Andreas, Rampage and Jumanji: Welcome to the Jungle.  Some of these films were garbage but it’s a testament to his popularity that fans still paid to see them.

His latest vehicle has a strong chance of joining that aforementioned list.  Inspired by the likes of Die Hard and The Towering Inferno, Skyscraper is an escape movie which takes place in a high-rise building.  As tends to be the case in Dwayne Johnson films, every detail is taken to the extreme.  The high-rise is known as the Pearl and is the tallest man-made structure ever created – a 220 storey colossus located in central Hong Kong.  It cost more than $6 billion and generates all its own electricity.

Our hero is Will Sawyer (Johnson) – a man who has been through some tough times but is now as happy as he’s ever been.  He was once a member of the FBI’s Hostage Rescue Team but that chapter in his life came to an abrupt end when he lost his left leg in a hostage negotiation gone wrong.  The silver lining is that he met the love of his life (Campbell) while recovering in hospital and they’re now married with two children.  Will has become a family guy – working as a private security contractor during the day and spending quality time with his kids at night.  Walking around isn’t a problem thanks to the help of a state-of-the-art prosthetic leg.

Okay, let’s get to the action.  Will has been visiting the Pearl at the request of its owner (Han) to review its security features but at the same time, a Scandinavian villain (Møller) and his team of incompetent henchmen are trying to destroy the building.  We end up with a situation where the middle of the tower is set alight, Will is stuck at the bottom, and his wife and kids are trapped on the upper floors.  The police have no idea what’s going on and so Will has to use a mix of brain and brawn to rescue his family and save the day.

Skyscraper is formulaic when it comes to story.  We’ve got stereotypical European bad guys and it’s as if the actors have been told to look as shifty and dodgy as possible.  It’s nice to see Australian Noah Taylor (Shine) with a role in a major Hollywood movie but even as one of the more prominent villains, he’s given nothing to work with in terms of character and dialogue.  Several plot points also feel contrived.  There’s a head-scratching scene where Will’s family is split into two groups of two and a silly finale which takes place in an odd room.

Those shortcomings can be overlooked though because Skyscraper features some outstanding action pieces.  Maybe it’s because I’m petrified of heights but my hands were sweating during some sequences.  Writer-director Rawson Marshall Thurber (Central Intelligence) has created some tense, exciting predicaments that the one-legged Will must extricate himself from.  The great visual and sound effects help add to the drama.  You can’t ask for much more when it comes to the action genre.

Moving at a cracking pace for its tight 102 minute running time, Skyscaper looks to be another winner for Dwayne Johnson.