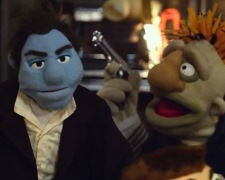 Director Brian Henson, the son of Muppets creator Jim Henson, has made some wholesome family movies across his lengthy career.  He made The Muppet Christmas Carol and Muppet Treasure Island in the 1990s and has been involved as an executive producer in numerous other films and television shows involving puppets and/or animation.

If you’ve seen the trailer, you’ll realise this is a very different puppet movie.  Seth Rogen created a raunchy, MA-rated animated feature in 2016 with Sausage Party and now Henson is pitching to the same audience with The Happytime Murders.  It’s hard to envisage a movie with cute, loveable puppets that, according to Australian Classification, contains “strong crude sexual humour and coarse language.”  Suffice to say it’s not for kids.

If we exclude the lawyer’s fees, the film received some free publicity back in May when it released its tagline of “No sesame. All street”.  Those with the rights to Sesame Street sued the film’s creators because they were worried about public perception and their valuable brand.  The district judge ruled against them saying they had not demonstrated that moviegoers were confused or people were complaining.  Hence, the appropriate tagline remains.

In terms of the narrative, the film is set in current day Los Angeles where puppets and humans live side by side.  Well, it’s not quite that simple.  Puppets are discriminated against on a daily basis in that they are harassed on the street and denied job opportunities.  There’s a blue muppet by the name of Phil Philips (Barretta) who became the first to serve in the police force but was discharged after a case went bad.  He now works as a private detective in a dingy office alongside his loyal secretary (Rudolph).

Phil now has a chance to redeem himself however.  A group of puppets are murdered in brutal fashion and there’s a clear connection given all of them starred in a successful TV show which is about to go into syndication.  Phil is brought back into the police force as a “consultant” to assist his former partner, Detective Connie Edwards (McCarthy), to work out who is behind this awful crime.

It’s fun for a while but once the novelty wears off, you realise The Happytime Murders has a thin, limited storyline.  In creating a 90 minute feature film, we need more than to watch puppets smoke, swear and talk smuttily.  There should have been more to the mystery or perhaps a few more characters to be invested in.  That’s the difference between this and Sausage Party – a superior, more complex film because of its wit and religious undertones.

My hopes were high for The Happytime Murders but this may struggle to find an audience.