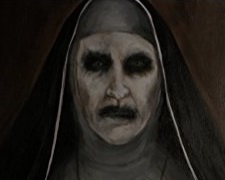 Standing in line for a movie can but quite tedious but the PR company behind The Nun made that experience more entertaining at the film’s Brisbane premiere.  People dressed up as nuns, with full black face masks, would go up to folks in the queue, stand right next to them, and then stare for an awkwardly long period of time.  It was creepy but also kind of cool.

I wish I felt a similar vibe on leaving the theatre but alas, The Nun is light on story and scares.  It’s the 5th film in the fast growing Conjuring Universe which began in 2013 with The Conjuring and has continued with a sequel and two Annabelle movies.  Those that saw The Conjuring 2 (released in 2016) will already be familiar with the demonic character which is centre stage in this instalment.

The franchise likes to jump around in terms of timelines and The Nun takes us back to the year 1952 and a secretive convent located in a Romanian forest.  A crossword-loving priest, Father Burke (Bichir), has been instructed by the Vatican to investigate the unusual death of a young nun.  He is accompanied by Sister Irene (Farmiga), a young woman who has mysterious visions that will be of relevance.

If you’ve seen the earlier movies, you should have an idea what to expect here.  There’s some nasty stuff going on inside the convent but to help prolong the narrative, the surviving nuns are cryptic in providing information and clues.  The bottom line is that there is a demonic presence which takes the form of a nun and is intent on destruction.

We’ve seen some creative horror-thrillers this year (A Quiet Place, Hereditary) but The Nun lacks originality and relies too heavily on clichés and formulas.  There are scenes where you catch a glimpse of something ghoulish before it runs away.  There are creepy shadows that loom out of nowhere and are designed to scare.  There’s a blaring film score mixed with moments of silence and loud screams.

With just two major characters, neither who are particularly interesting, the film struggles to build a compelling narrative.  We’re just going through the motions watching them stumble around the convent and making dumb decisions.  Taissa Farmiga steps into the shoes of Sister Irene – a curious touch given her older sister, Vera Farmiga, played an integral character in the two Conjuring movies.  She gets the best of the material with Demián Bichir looking bored as Father Burke.

We’ll be seeing more from the franchise given its continued success at the box-office but in my opinion, it has run out of puff.