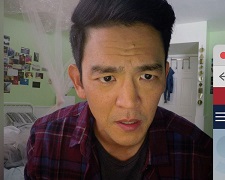 It’s not an entirely original concept (see Unfriended back in 2015) but Searching still wins points for being a not-so-ordinary thriller.  The hook is that it’s set entirely on computer screens.  Every event that takes place is viewed through someone’s iPhone or home PC.  It sounds limiting but you may be surprised how much of your own communication and news consumption comes via the internet.

There’s a cute, nostalgic introduction that will warrant a smile from older audiences.  It follows the upbringing of 16-year-old Margot Kim (La) but only in the sense of her online activity.  It begins with her father, David (Cho), setting up a login account on their home computer (using a humorously old version of Windows).  We then see her upload photos of key events, book in calendar appointments, and create her first Facebook profile.

Now that we’ve brought up to speed, we watch a FaceTime conversation where David is told by his daughter that she’ll be pulling an “all-nighter” at a friend’s house as they study for an upcoming exam.  He wakes up the next morning to find several missed phone calls from Margot but on calling back, she fails to answer.  He’s slightly concerned but his assumption is that she’s gone straight from the friend’s house to school and they’ll see each other that night for dinner.

It’s not until later in the day that he realises something is wrong.  She didn’t attend school and she missed an afternoon piano lesson.  Even more alarming is the revelation from the piano teacher that Margot cancelled her lessons six months ago.  He gets in touch with several of his daughter’s school friends and learns other unexpected things.  Consumed with a mix of worry and shock, he calls on the assistance of his brother (Lee) and a renowned police detective (Messing) to put the pieces of the puzzle together and find Margot.

There is plenty to think about here.  There’s a part of the movie where David is able to hack into his daughter’s social media accounts and go through her list of friends and past conversations.  It’s amazing how much we reveal about ourselves through online mediums and it comes as a huge eye-opener to David.  Can you imagine your friends and family digging through your private emails and online conversations?  Would it portray you as a different person to the one they’re aware of?

The film is not without its flaws.  In keeping it all confined to the computer screen, there are some news stories watched by David that don’t feel authentic.  They are providing footage or giving up information that would not normally be televised.  That said, 27-year-old director Aneesh Chaganty deserves praise for his creative vision.  He made a name for himself in 2014 when he crafted a 2 ½ minute short film, shot entirely using smart glasses, that follows a person travelling from America to India to deliver an envelope.  It’s now attracted close to 3 million views on YouTube.

It’s amazing how Chaganty creates tension by simply watching people type on a screen (including the wait for a reply) and scrolling through old messages.  It’s easily to overlook the actors in a movie like this but John Cho (Star Trek) is terrific as the distressed father.  We may not have been in the same position before but you’ll still relate to his actions and emotions.

Things get a little too “twisty” during the climax but Searching is a cool concept with strong execution.