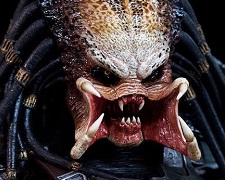 In 1987, 25-year-old Shane Black landed his first significant role in Hollywood.  He played a U.S. mercenary who was brutally killed by an alien in the original Predator.  Since that time, Black has made a name for himself as both a writer (Lethal Weapon) and a director (The Nice Guys, Kiss Kiss Bang Bang).  It’s a cute touch that the now 56-year-old Black sits in the director’s chair for this new Predator flick.  It’s now his decision as to which characters will meet a grizzly, gruesome demise.

It comes with a completely fresh cast but The Predator is best described as a sequel (as opposed to a reboot) as it makes reference to events in the earlier movies.  It opens with a sequence that will sound familiar to fans of the series and the broader genre – an alien spaceship slips through a black hole and crashes in a secluded forest on Earth.  On board is a large, hideous creature who is almost impossible to kill due to his agility, strength, and cloaking powers.

There’s an amusing, Family Guy style gag in the movie about why scientists refer to the creatures as “Predators”.  That name isn’t fully appropriate as they only attack people who are armed and they don’t rely on humans as a source of food.  Alternative descriptors are suggested but for whatever reason, Predators is what we’re stuck with.  These scenes are relevant as they highlight that The Predator is as much of a comedy as it is a sci-fi thriller.

The characters are an eclectic bunch.  Boyd Holbrook (Logan) heads a group of military misfits who find themselves in the firing line of not just the Predators but also a secretive government agency, headed by the villainous Stirling K. Brown, looking to protect their alien research.  I’d humorously argue that these guys end up killing more humans (for good reason I might add) than they do aliens!

Other “good guys” include Olivia Munn (X-Men: Apocalypse) as a scientist who finds herself in the firing line and the adorable Jacob Tremblay (Room) as a young boy with autism who comes into contact with alien technology.  Australian Yvonne Strahovski (Chuck) also gets a few good one liners as a mother who finds her house overrun by the military folk as they hide from the approaching creatures.

This is mindless, harmless entertainment.  Aside from the laughs, it’s not offering much in terms of thrills and originality.  We’ve seen this movie before and, based on the climax, we’re likely to see it again.  I have no issue with the cast and their wide range of personalities.  My problem is that it’s such a familiar narrative and there’s nothing special about the major action pieces.

Box-office will determine whether there’s a 7th film (if we include the Alien v Predator movies) in this long running franchise.  If there is, I’ll be going in with lower expectations.