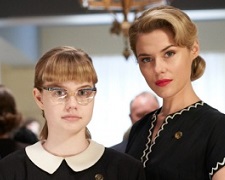 There’s a Facebook page I follow which features old photos of Brisbane going back to the 19th Century.  I’m a sucker for nostalgia and it’s cool to see how much has changed (and not changed) in recent decades.  If that kind of thing is of interest to you, Ladies in Black is worth your money for its setting alone.  It takes place in Sydney, 1959 with the focus being the hard-working ladies who serve customers in a David Jones style department store known as “Goode’s”.  There are no EFTPOS machines, bar codes or high-tech sound systems.  This was a time when customers were greeted by a doorman and soothed by the beautiful music of an in-store pianist.

Based on the novel by Madeleine St. John and brought to the screen by director Bruce Beresford (Breaker Morant, Driving Miss Daisy), Ladies in Black spreads its time across a wide assortment of characters.  Lisa (Rice) is a 16-year-old who has accepted a summer job at Goode’s to help in the women’s clothes department over the busy Christmas period.  She has loftier goals of going to university and studying arts but this is her chance to put a few dollars in the bank before going down that path.

A group of women take the inexperienced Lisa under their wing and show her the ropes.  Miss Cartwright (Hazlehurst) is the wise elder stateswoman who is quick to defuse tricky situations – everything from vomit on the floor to an ill-fitting dress.  Fay (Taylor) and Patty (McGirr) are two close friends who love to gossip about customers and snarky staff members.  Madga (Ormond) is an immigrant from Slovenia who schmoozes clients with her European accent and extensive knowledge of fashion.

There’s not a lot of conflict in the movie but that’s not its intention.  This is a fun, easy-to-like drama about good things happening to good people.  Everyone has something to learn and something to share.  Fay is quick to share her wisdom when it comes to customer service and in return, Lisa teaches her about classic literary works including Anna Karenina.  Madga provides a crash course in expensive, high-end fashion and again, Lisa repays the favour by helping find a date for Magda’s migrant friend (Corr).

There are a lot of great individual scenes.  One of the best arrives early in the film when Lisa tries to convince her conservative father (Jacobson) that she should attend university.  Her mother suggests she wait until he’s in a good mood… and the perfect time arrives when he backs the winner of a horse race.  Another sequence takes us back to a long-forgotten time when school results were published in major newspapers and Lisa’s father is inundated with congratulatory words.  There’s no shortage of laughs either with Beresford including a running gag about the rivalry between Sydney and Melbourne.

The performances here are top-notch.  17-year-old Angourie Rice (The Nice Guys, The Beguiled) is one of the best teen actresses in the business and is immensely likeable as the sweet-smiling Lisa.  Her character has a charm and innocence that reels in friends like a magnet.  Julia Ormond (Legends of the Fall) brings a great accent and take-no-prisoners vibe to her role as Magda while Rachael Taylor (Red Dog) is terrific as she illustrates the insecurities of the doubting Fay.

There’s a deeper layer to the narrative which offers a 1950s perspective on issues such as women’s rights and immigration but it’s not pushed in a heavy-handed manner.  Bruce Beresford’s gets his message across by having us fall in love with these wonderful characters and for that reason, Ladies in Black is of the year’s best Australian flicks.